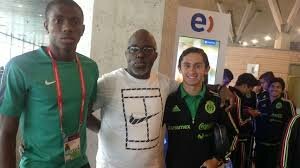 Pinnick was quick to join in mourning with Osimhen and his family, at the emergence of the shocking news about the passing of the player’s father late in the night, as the former VfL Wolfsburg of Germany and Sporting Charleroi of Belgium hitman took to social media early Sunday to reveal the sad development.

Soon after Osimhen broke the news himself, Pinnick led the rain of sympathy and support that rolled out in favour of the Chile 2015 FIFA U-17 World Cup top scorer and member of Nigeria’s squad that won bronze at last year’s Africa Cup of Nations in Egypt.

Osimhen is the record holder for number of goals both overall and in a single edition of the U17 World Cup, after winning the top scorer in Chile with 10 goals as the Golden Eaglets cruised to a fifth title, and he has since gone on to become a full senor international.

Back with the Eagles, he was involved in all four goals against Lesotho in Maseru, scoring two and providing assists for the other two as Nigeria got a firm hold on leadership of their AFCON qualifying pool, and he 18 goals in all competitions for Lille this season, prompting keen interest from top clubs in England, Spain and Italy, but he will now enter the summer n mourning mood.

A press statement by the NFF’s communications department disclosed that Pinnick was the first to reach out to the player following the outbreak of the sad news, and he assured the former U17 World Cup winner of the empathy and support of the country’s football family at this challenging moment for the youngster and his family.

Pinnick disclosed: “I have spoken to Victor Osimhen and expressed the sorrow of the NFF and the entire Nigerian Football family. The loss of either parent is usually a moment of heartbreak for anyone. We condole with Victor at this moment and pray that God will grant his late father eternal rest, while also granting the family the fortitude to bear the great loss.”