Zirkzee Won’t Be Easy To Switch Allegiance For Nigeria – Rohr 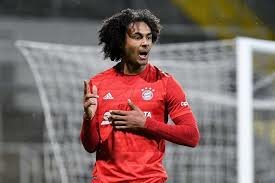 Super Eagles’ coach, Gernot Rohr has admitted it will not be easy to lure Bayern Munich of Germany fast-rising youngster, Joshua Orobosa Zirkzee to switch allegiance from Holland and play for Nigeria, megasportsarena.com reports.

While admitting he cherishes seeing Zirkzee growing in leaps and bounds at one of the clubs he played for in his heyday, Rohr acknowledged that the youngster is already cementing his place in The Dutch Oranje Gang, hence the difficulty Nigeria Football Federation (NFF) would face in trying to make him switch allegiance.

Indeed, the Schiedam-born Zirkzee has 26 caps for Holland’s youth teams, scoring 14 goals, with nine of them for the Dutch under-19 squad, and Rohr admitted that it will be difficult for him or anyone in the NFF to convince the lad to pledge his international future to the Eagles.

He also spoke about the chances of luring Hertha Berlin’s Jordan Torunarigha, Augsburg’s duo of Felix Uduokhai and Noah Bazee, and TSG Hoffenheim’s Kevin Akpoguma, who have all been approached in the past to switch their allegiances from Germany to Nigeria without success.

While Bazee was once invited to the Eagles and even trained with the squad in London, England before an international friendly in March 2017, Rohr interjected that the player has to make a concrete move to prove his desire, adding that he will not force anyone to switch allegiance.

He used Heracles Almelo of Holland striker, Cyriel Dessers as an example, saying the Dutch Eredivisie League’s top scorer easily and willingly opted to play for the three-time African champions, which is not the same case with Zirkzee’s case.

The Franco-German tactician pointed out that the Dutch FA moved fast to name the Munich teenager in their under-21 teams provisional squad for their European Championship qualifiers against Belarus and Portugal in March.

Although both games were postponed due to the coronavirus outbreak, the 19-year-old already become provisionally tied to his country of birth on October 13, 2017 when he got a competitive debut with their under-17 team in a European Championship qualifier against Hungary.

The former Niger Republic, Gabon and Burkinas Faso handler added that he was impressed when he saw firsthand the qualities Zirkzee posses when he personally scouted him on his full Bundesliga debut against Hoffenheim three months ago.

However, while labeling the Bayern whiz-kid as a fantastic talent, Rohr concluded with a verdict that he believes the lad with Edo State blood is beyond Nigeria’s reach, while many others like him currently making waves in Der Bundesliga also appear on similar scales.

Rohr told Eagles’ former media officer, Colin Udoh in an Instagram conversation: “The players who are actually in Germany, Jordan Torunarigha and Uduokhai played already for Germany U23, especially Uduokhai he’s qualified for the Olympics, Felix wants to go to the Olympics with Germany, I can understand it.

“There is also Zirkzee of Bayern Munich. He’s a fantastic talent also but he’s playing already for Holland and it’s not easy to have them. I never beg any player to play for Nigeria, this decision must be done by the players themselves; like we have Cyriel Dessers, who played for another country and he wants to play for us. I met him, spoke to him, saw his matches and then invited him.

“It’s not so easy, you cannot choose the best players if they played already for other countries, they must give us signs they want to come to Nigeria. I met Akpoguma also from Hoffenheim, his parents, we spoke about it, his father is Nigerian and he would like him to come with us but the boy was born in Germany and he’s feeling more like a German.

“You cannot force somebody to come, we have a lot of talents in Germany, also Noah Bazee who is playing again in Augsburg together with Felix Uduokhai. They must give us the sign to come, we are here and we show them there is hope for them and if they want to play in the World Cup and AFCON with us they are welcome but they must decide.”