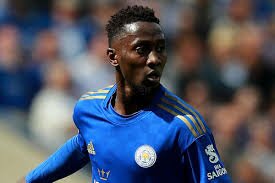 Leicester City of England midfielder, Wilfred Onyinyen Ndidi has gained interesting summer transfer attention from Chelsea, with a suggestion that he could be on his way to Stamford Bridge and join his club’s English Premier League rivals at the end of this season, megasportsarena.com reports.

This is sequel to reports out of Queensland indicating that Chelsea are the latest club that are being linked with a move for Ndidi, but The Blues face competition for his signature from some other teams in the EPL as well as a couple of others across the English Channel.

A survey by Spanish transfer market website, Todofichajes disclosed that Ndidi is also under the radar of Real Madrid of Spain as well as of Paris Saint-Germain of France, as the former Racing Genk of Belgium ace continues drawing rave reviews and links that are in consonance with his majestic strides so far this season.

Incidentally, the product of Nath Boys FC of Lagos has disclosed over time that he supported The Blues when he was a kid, such that crossing over to Stamford Bridge from King Power Stadium would be a dramatic move for the Super Eagles star, who is valued in the region of 40m euros.

It is now left to be see whether Leicester would be ready to entertain an offer from Chelsea for the 23-year-old Ndidi, who they bought from Genk in 2017 then gave an extended a six-year deal after he got his World Cup debut for Nigeria at Russia 2018.

The deal is meant to keep him with The Foxes until the end of the 2023/24 season, but Chelsea are trying to get a summer scoop, where another London-based EPL side, Arsenal failed, as suitors continue expanding for Ndidi, who remains very relevant for Leicester.

Despite injuries limiting his appearances this term, Ndidi has still been involved in 29 matches across all competitions this season and was in action for 2,224 minutes in the total quotient of time spent on the pitch with the former EPL champions, who are now facing huge dilemma to either sell the player for a financial lift this summer or keep him for more exploits in their team.