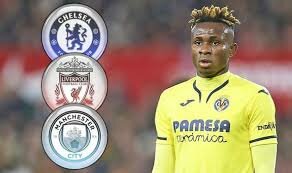 Villarreal of Spain winger, Samuel Chukwueze is bound to be the one to replace Brazilian ace, Willian in the colours of Chelsea of England in the summer transfer window; but two of The Blues’ English Premier League rivals, Manchester City and Liverpool, are also keen on snatching the left-footed dazzler.

Although Chukwueze is not enjoying the same quality of play and regular time on the pitch as he had during his breakthrough term with The Yellow Submarine, the Chile 2015 FIFA U-17 World Cup revelation is still drawing keen attention across Europe, and The Blues are now looking in his direction as a direct replacement for Willian.

Megasportsarena.com gathered from a report by Goal that the 21-year-old Chukwueze is being carefully considered by Chelsea, who are highly impressed with how he has become a regular in LaLiga after rapidly growing through Villarreal’s academy, following his arrival in 2016.

Chukwueze’s move to Villarreal came after his desire for a breakthrough at Arsenal of England failed to materialize, but he has since grown in stature and class, such that he continues to daze all observers with his outstanding dribbling ability and mesmerizing runs at goal.

Although his final ball could do with some refining and his goals scoring ratio has dipped to only four so far this season, Chukwueze has added a high level of team work and contributions to his game, which has seen him provide four assists, such that LaLiga experts believe a move to join Chelsea in the EPL could be a huge step forward for Diamond Academy of Umuahia product.

The report by Goal.com adds that Borussia Dortmund’s England whiz-kid, Jadon Sancho is The Blues’ boss, Frank Lampard’s preferred choice to bolster the wings this summer, but that move is under threat from similar interest in the lad by EPL rivals, Manchester United, thereby creating room for Chukwueze as the first alternative if they fail to snatch their main target.

Although Chukwueze is also on the radar of Chelsea’s EPL rivals, Liverpool and Arsenal as well as clubs in Spain, he has stated over the years that he grew up supporting The Blues because of the presence of former Super Eagles’ captain, John Mikel Obi at the London-based high-profile club.

He could now be on his way to continue the Nigerian tradition at Stamford Bridge, which also has Celestine Babayaro, Kenneth Omeruo and Victor Moses, as well as several youth team players listed, such that Chukwueze could be the one to step in should The Blues fail to hook 20-year-old Sancho, who has two years left at Dortmund and is valued at more than 110m euros.

Goal.com added: “Chelsea are keen keen on bringing Sancho to Stamford Bridge this summer but face stiff competition from Premier League rival Manchester United and the coronavirus pandemic has dealt a blow to the finances of even the big clubs.

“The Red Devils were believed to be in an advantageous position to sign the English winger before the global pandemic, then Frank Lampard side will consider turning their attention to 21-year old Villarreal player Chukwueze, as per the same report.

“Sancho has two years left on his deal with the Bundesliga club, is valued at more than 110 million euros by Borussia Dortmund, while Super Eagles winger who is a cheaper alternative is also on the radar of Chelsea’s Premier League rivals Liverpool and Arsenal as well as clubs in Spain.”