Valentine Ozornwafor Moves From Galatasaray On Loan To Almeria 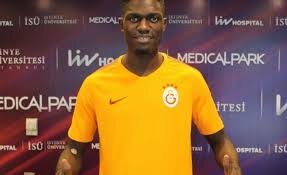 Former Enyimba of Aba central defender, Valentine Ozornwafor has joined the growing array of Nigerian players plying their trade in The Land of The Armada, as he has sealed a loan move from Galatasaray of Turkey to UD Almeria of Spain, megasportsarena.com has learnt.

In contrast with initial expectations that he will settle down with Gala in the Turkish Super Lig, latest developments indicate that Ozornwafor will spend this season playing in the Spanish second-tier Segunda Liga with Almería, who in the past had the duo of Kalu Uche and Ramon Azeez.

Signed from Enyimba in the summer transfer window, Ozornwafor was one of the players included on the Super Eagles’ standby list for the 2019 Africa Cup of Nations in Egypt, but he failed to make the final cut.

However, the 20-year-old towering stopper started five matches for the youth team, Flying Eagles at the 2019 U-20 AFCON and FIFA U-20 World Cup in Poland, after which he featured for Nigeria’s under-23 squad, Olympic Eagles against Libya in the AFCON U-23 qualifiers second leg.

Ozornwafor was involved in Galatasaray’s pre-season matches against RB Leipzig, Augsburg and Bordeaux, but the tall stopper was omitted from the match day squad for their first competitive match of the 2019-20 campaign against Denizlispor last Friday.

He has now been loaned to Almeria, which officials at Galatasaray say is meant for him to continue his development, as he is not guaranteed the prospects of regular playing time in Turkey.