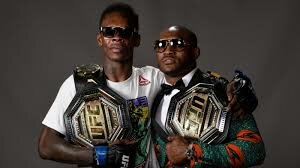 Nigeria’s stars in Ultimate Fighting Challenge (UFC), Israel Adesanya and Kamaru Usman are both at the centre of controversial debates swirling round possible title fights in the coming days, as they both look to put their belts on the line against potential cliff hanger opponents, megasportsarena.com reports.

While Usman has been talking about his desire to tango one of the most prized Mixed Martial Arts (MMA) icons, Conor McGregor, Adesanya’s issue is a long standing verbal face-off with Jon Jones, which fight fans now want to see go beyond mere ‘trash talk’ in the press.

Fight expert, Patrick Blennerhassett noted that Jones and Adesanya have increasingly been taking verbal shots at each other for the last few months, and it has reached a fever pitch on social media over the past few days, but the charge to them both is that the next level requires that they step into the Octagon.

He advocates that they should just simply fight and settle their feud, as ‘Bones’ and ‘The Last Stylebender’ have both been yammering away on Twitter during void created by COVID-19, and he stressed that UFC president, Dana White should get them into the Octagon as soon as he can.

Blennerhassett added: “The whole thing kind of sounds like a beef between high school drama queens, and as far as I can find, it dates back years ago to when Adesanya was still an unknown fighter and Jones unfollowed him on Instagram and name dropped him on TMZ.

“Sounds so millennial. Many see Adesanya as Jones’ successor as they have a lot of similarities in terms of fighting styles, personalities and career trajectories. This year also feels like the perfect time for the two to square off.

Usman’s manager is willing to give the title shot to McGregor, whose previously eyed action for himself in the welterweight division, and, ahead of a potential championship meeting at 170lbs, ‘The Nigerian Nightmare’ has aimed a brutal verbal dig at the former UFC double champion.

The champion versus McGregor could be a reality, after Abdelaziz gave the green light for the title fight, and the fearsome Nigerian fighter took to Twitter to reveal his boast, accompanied with a photoshopped picture of himself and the Irishman inside the Octagon.

Usman wrote: “I really don’t understand why you all want this man DEAD!!! I’d shag him in there if I wanted and he’d ‘DO NOTHIN’ FOH. It looks like #1 contender wants to fight Nate Diaz now. Good for him. @TheNotoriousMMA hey you want a title shot ? Come to daddy @USMAN84kg will give you one and he promise first 2 rounds without takedowns only slaps.”

However, despite the reports claiming Abdelaziz is pushing the champ towards a mega-fight with McGregor, Masvidal remains firm in his belief that Usman will not get the bout, because he believes the Nigerian will price himself out of an iconic matchup, thereby leaving him to dictate terms.

Masvidal cleared the air about his status as the number one contender, despite reports that welterweight champ, Usman was looking for a fight against McGregor, which would leave the contender to rematch Nate Diaz, a fight that he has expressed an interest in.

The fight would certainly be attractive to casual and hardcore MMA fans alike, while early Vegas projections show promising numbers for a potential BMF sequel; but Masvidal told ESPN’s Ariel Helwani: “To tell you the truth I don’t care, he’s desperate and is calling out to everybody.”