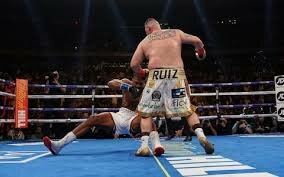 Alarm bells have hit Nigerian-born British heavyweight boxer, Anthony Olaseni Oluwafemi Joshua, as he may end missing out on a highly-desired and much-expected rematch with Mexican usurper, Andy Ruiz Jnr, but rival title holder, Deontay Wilder says he is ready to step in.

Joshua had been hopping on quickly regaining the three world belts he lost to Ruiz during his USA debut on June 1 at Madison Square Garden, New York, with a rematch expected in November or December, but the man who took his belts is now dragging feet on that agreement.

However, megasportsarena.com has gathered that, against all of Joshua’s expectations, Ruiz has placed a cloud of doubt on the possibility of a rematch with the Brit, following reports of an alleged failed drugs test of another British heavyweight fighter, Dillian Whyte.

Ruiz shocked the world by knocking ‘AJ’ out last month to capture the IBF, WBA and WBO world heavyweight titles, but while there was a rematch clause in that first bout, with the location of the fight thought to be the only stumbling block, the Mexican-American is now stalling.

While Joshua’s promoter, Eddie Hearn insists the rematch will still hold either in November or December, Ruiz said he is unwilling to travel to the UK for a second bout, which he is not even thinking about for now.

Ruiz wrote on social media: “I love everyone’s passion for boxing on twitter (but) I’m not going to the UK for the rematch #issasetup.

“I appreciate the people who can argue without insulting those are the people I will always reply to. It’s all love.”

On the other hand, Wilder said he intends to keep the heavyweight division exciting by taking on all of the best rivals available, including Joshua and Ruiz Jr.

A megabucks fight between Wilder and Joshua has long been mooted, but negotiations failed and the American instead faced Tyson Fury last year, during which he kept his WBC belt in a controversial draw.

Joshua subsequently fought Ruiz and was stunned in the first defeat of his career, in his United States debut, but Wilder insists that loss would not put him off facing the Nigerian-born pugilist.

While hinting that he could still face ‘AJ’ in future, Wilder added that Ruiz is also a possible opponent, and The Bronze Bomber boasted that he is open to everything.

Wilder told talkSPORT: “The heavyweight division is so small – there’s enough room for everybody to get in with everybody. The belts are switching up to different faces and different hands.

“With everything that’s going on in the heavyweight division, it’s so exciting. Everybody trying to see who is the number one. And everybody wants to be number one. I can see how pressure could be added to this.

“People ask, ‘Are you still going to fight AJ?’. Just because someone loses doesn’t mean it’s the end of the road. That’s how you become a two-time, three-time, four-time champion.

“Before I retire, I want to be able to say I fought the best, all of the best, no matter who they were, if they had a buzz and people wanted to see that fight.

“In boxing, anything is possible. With Andy, we’re on the same team. It would be a hell of a lot easier for me and him to make that fight happen, no problems, no questions asked.

“It’s very interesting now with which avenue [to go down]. In boxing, it can be set to go down one direction and in a split moment it can go down another.

“I’m open to any and everything – I’m the best in the world and I’m willing to prove that each and every time.

“This is a well lit division, it’s so exciting, and I want to do my part as a champion to make sure it stays that way.”

Wilder added that the pressure of a packed division got to Joshua as he struggled against Ruiz, claiming the Briton “quit” as he was defeated.

“I wasn’t amazed at all,” he said. “I knew Andy Ruiz, I knew that he had some good boxing skills. In my eyes, he’s still undefeated because I felt that he beat [Joseph] Parker [who beat Ruiz in December 2016].

“I knew that Joshua would be up for a test – not just because of Ruiz but because he was changing scenery. He’d never been over here before in his professional career to defend his title with a lot of other things that were going on.

“I think Ruiz beat him too easily. I don’t think Joshua knows how he lost right now.

“In my opinion, Joshua quit. As a fighter looking in, reading the body language, he quit. I’m sad to say he quit. I don’t think he’s a quitter but he quit that night.”

Joshua’s own post-fight explanation of his defeat was simply that his “performance didn’t go to plan” as he insisted he could still walk “with my head held high like a champion.”