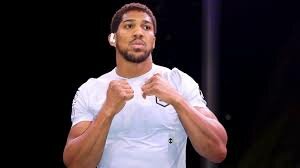 Nigeria-born world heavyweight boxing champion, Anthony Olaseni Oluwafemi Joshua might end up having his mandatory title defence against Bulgaria’s Kubrat Pulev staged at a small venue in Great Britain, due to constraints caused by the coronavirus pandemic, megasportsarena.com reports.

While a new date is yet to be fixed for the fight, which has been sanctioned by International Boxing Federation (IBF), updated reports revealed that Joshua’s promoter, Eddie Hearn has served up a strong hint that the bout with Pulev could be staged in front of a small UK crowd later this year.

Until lockdown the IBF, WBA and WBO title fight was planned for Tottenham Hotspur Stadium in London, a 62,000-seat capacity venue, but Hearn admits it could be hard getting a similar sized venue, even as he stressed that the absolute priority is to reschedule the fight at another arena in the UK.

While also disclosing his plans to bring back boxing at a behind-closed-doors venue in July, with Dillian Whyte versus Alexander Povetkin and Katie Taylor against Amanda Serrano already being planned to hold without a crowd, Hearn submitted that Joshua’s next fight will have to wait until later this year, and would most likely hold at a miniature venue in Britain.

Hearn told Sky Sports: “We’re working on the assumption that AJ vs Pulev will not be able to take place in a venue the size of the Tottenham Hotspur Stadium. Our absolute priority is to stage the fight in the UK.

“It would be great for sports coming back, and businesses coming back, to have a world heavyweight title fight taking place on these shores. We’ve had interest from the Middle East, the Far East, yet to receive anything official from Croatia but they have shown interest too.

“But we’d like to do it [in the UK]. We are starting to look at venues that are smaller. There is the possibility of us staging the AJ fight in the UK. I don’t think it will be behind closed doors. If we can get some kind of number together [for a potential crowd] we can create an exclusive event to keep this fight in the UK.”