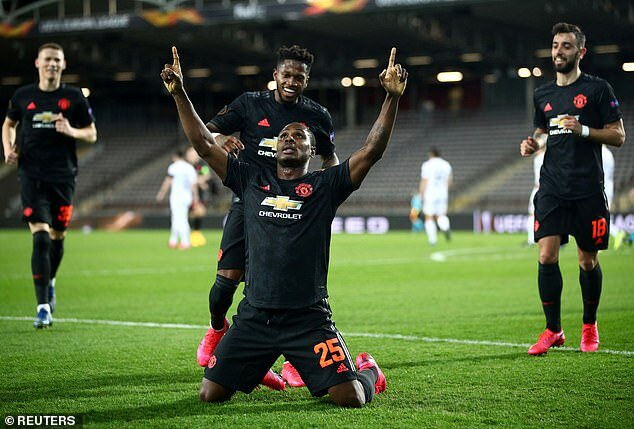 Former Super Eagles’ striker, Odion Jude Ighalo has pulled off another miracle at Manchester United, as the star on loan from Shanghai Shenhua of China has pulled off a last ditch extension to his stay at Old Trafford, megasportsarena.com learnt.

Despite the likelihood of him pulling off the deal looked very slim heading into the early hours of Monday, with seconds ticking away on the expiry of his initial short term loan from Shenhua, all things looked bleak and gloom, until a startling confirmation came just before midday.

Details of the report by British newspaper, The Telegraph revealed that Ighalo has agreed to extend his United contract until the end of January 2021, but the deal is awaiting confirmation from the FA for registration.

Sportsmail earlier reported that Ighalo’s loan fee has been a problem for United, but the new agreement means Ighalo will miss a large chunk of the new Chinese Super League season, which is due to start in July.

The Red Devils will now pay a portion of Ighalo’s wages and a fee to Shenhua, while his next contract will be discussed after his loan ends, as the 30-year-old hitman, who has been a hit at Old Trafford since his temporary move earlier this year, with four goals to his name from eight matches in only two months, will now focus on the second chapter of his days at The Theatre of Dreams.

It is another miraculous breakthrough for Ighalo, who initially joined Ole Gunnar Solskjaer’s side in a shock deadline-day move in January after the club had missed out on signing Norwegian star Erling Haaland to Borussia Dortmund.

His memorable strikes so far in a United shirt have included a stunning volley in the Europa League win over LASK Linz as well as a double in the FA Cup against Derby to help his side through to the quarter-final stage.

Ighalo’s agent, Atta Aneke told Norwegian outlet, Nettavisen: “We (have) an agreement with Manchester United on an extended loan. The agreement will mean that Ighalo will remain with them until January 2021.”

The news comes a few days after Solskjaer admitted his desire to keep the 2019 Africa Cup of Nations top scorer beyond the expiration of his current loan, even as the striker’s current contract in China expires in December 2022, but Shanghai want to keep him until at least December 2024.

Solskjaer retorted: “They’ve been great towards us, his club, allowing him to play. It’s been a dream for him. Hopefully he can finish off what he started, maybe with a trophy or two.”