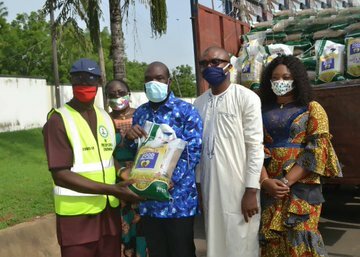 Columbus Crew of America striker, Fanendo Adi has stated that he feels highly honoured with the chance he recently had to donate food, goods and gift items to some less-privileged people in Benue State, as he reckons it was an opportunity for him to support the community, megasportsarena.com reports.

The former under-23 national team, Olympic Eagles forward said he was humbled by positive reactions trailing his donation of 2,000 bags of rice to the vulnerable in his home state, where he added that he appreciates the privilege of aiding palliatives to ward off economic constraints and other side-effects of the coronavirus pandemic.

“It’s indeed my humble pleasure to help these masses of Venue State in this very challenging period. We all know that what’s happening now is due to no fault of the people, and to be in a position to help is very fulfilling.

“I thank God for His blessing for me to be able to help and I know this food item will surely get to the targeted vulnerable in the state,” said Adi, who was twice invited to the Olympic Eagles in 2011 and once to the senior squad, when they faced Egypt in two unsuccessful 2017 Africa Cup of Nations qualifiers in March 2016, but did not eventually play both home and away matches.

Adi also highlighted his donations on social media, as he posted via his verified Twitter handle fanendoadiOfficial @fanendo: “I and my family are honored and privileged to donate 2000 10kg bags of rice to @benuestategovt , during this difficult times for the vulnerable, Thanks.”