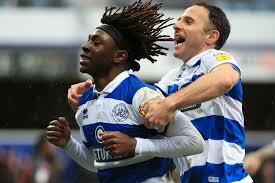 Queens Park Rangers of England rave of the moment, Eberechi Eze has opened up on the level of inspiration he gained from watching fellow-Nigerian-born dazzler, Dele Alli with Tottenham Hotspur, and keeps trying as much as possible to style his game after the England international, megasportsarena.com reports.

Although Alli does his thing with Spurs n the top-flight English Premier League, while he still competes with QPR in the lower echelon Championship, Eze says wants to shape his aspirations and best position in the game after the former Milton Keynes Dons star, who he says motivates him a lot with his style of play and passion for success.

In what could be an inference that he is bound to jettison an opportunity of playing for Nigeria at senor level, in order to take after Alli in England’s Three Lions, Eze, who has hit home 12 goals and eight assists from 39 competitive games, stressed that he aims to keep improving every day.

The 21-year-old has seen his stock rise, as he has been one of the outstanding icons that have taken The Rs close to a promotion spot back to the EPL, and a summer departure to a big side in England has been mooted for him all through this season.

Prominent amongst his list of Eze’s admirers is Alli’s club, as Tottenham have already scouted him this season and are willing to do business with Mark Waburton’s side, which could be the sharpest route for the dreadlocks-wearing lad to finally surpass his current height and ultimately get to rub shoulders with the lad that gives him lots of motivation.

Eze said in an interview with The Beautiful Game Podcast: “[Alli] has shown that it’s possible to go from lower league and fit right in and even become more than what people expected you to be.

“I have goals and targets that I want to hit. I think It’s more about me applying myself every day and the belief I have in myself, the backing I have in myself I believe that I can reach the heights of football.

“I don’t want to put any limitations on myself. In terms of my ambitions I want to be at the top. I’m going to work as hard as I can and apply myself in any which way possible in order to reach there. I’m not going to stop until I get there.”