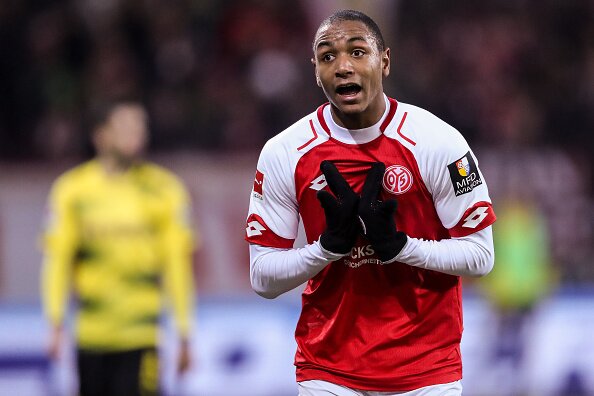 It was a gory Saturday for many Nigerian players on the first day of the restart of action in the German Bundesliga, as Felix Uduokhai had a goal cancelled by video assistant referee (VAR), while Jamilu Collins and Ademola Lookman failed to inspire their teams to victory, as they both settled for draws, on an evening physical distancing held sway in football for the first time ever.

Megasportsarena.com gathered that worst hit on a personal level was Augsburg’s Uduokhai, as the 22-year-old centre-back was denied a goal by VAR, and his side lost 2-1 to VfL Wolfsburg in the game at WWK Arena, but Heiko Herrlich’s men did not really feel the advantage of being at home, considering that every game had to be played behind closed doors and.

Augsburg’s Tin Jedvaj leveled the scoring in the 54th minute before Uduokhai was brought on for Marek Suchy and the Nigerian-born defender thought he had put The Fuggerstadter in front two minutes after his introduction when he found the back of the net.

The effort was, however, cancelled for offside, thus denying Uduokhai his first strike for Augsburg and a chance to beat his parent club, who sent on Nigerian-born attacker, Noah-Joel Sarenren-Bazee for Marco Richter with three minutes left but it was Daniel Ginczek, who also came off the bench, that made the difference, scoring for the visitors at the death.

Same evening, Collins was in 90 minutes action for SC Paderborn, but his side settled for a dull goalless draw with Fortuna Dusseldorf, in a match that saw very little passion at Merkur Spiel-Arena, as both teams registered a single shot on target each and ball possession spit at 50-50.

A similar scene played out for Lookman, who was a second-half substitute for RB Leipzig in their 1-1 draw against SC Freiburg, in a game that saw the visitors end up as the happier team, as they left Red Bull Arena despite having what could have been a late winner ruled out by VAR.

Same evening, TSG Hoffenheim’s Kevin Akpoguma put through his own net after 58 minutes in a 3-0 loss to Hertha Berlin at Rhein-Neckar-Arena; with Jordan Torunarigha starring for the visitors and he assisted Matheus Cunha for the third goal, while Chinedu Ekene was benched for all 90 minutes, as the gaffer, Alfred Schreuder felt satisfied with his side’s performance.