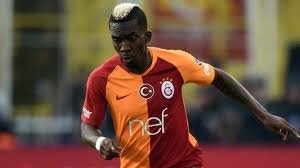 Super Eagles’ attacker, Henry Onyekuru has received the clearest signal for the realization of his much-desired permanent exit from AS Monaco of France, as latest feelers out of the French Ligue 1 club indicate that he has been declared surplus to requirements in their team, megasportsarena.com reports.

Onyekuru never found his feet in the first half of this season at Monaco, which he joined in a full contract from Everton of England last summer, and the youngster moved on loan to Galatasaray of Turkey n the January transfer window, after which he expressed a strong intent to stay put.

His aspirations now appear to be heading in the direction he wants, as Monaco are said to be seriously thinking of selling him this summer, as they am to cut their costs and draw n as much money as possible to make up for current financial shortcomings caused by coronavirus.

Although the former club of Victor Ikpeba, Lukman Haruna and Elderson Uwa Echiejile had initially stated their unwillingness to let Onyekuru go at the end of this season and looked sure to call him back Galatasaray, The Aristocrats have now tilted towards a different decision.

Details of the report out of France reveal that Monaco’s executive vice-president, Oleg Petrov is planning to sell 30 players in the upcoming transfer window, and one of those tipped for the exit door is Onyekuru, who is spending the second half of the halted season on loan at Galatasaray.

Foot Mercato reports further that the Principality outfit, which has the second largest payroll in the French Ligue 1, behind Paris-Saint Germane, want to part company with several players, in order to provide a economic cushion heading into next season and a better chance of competing in Europe, and Onyekuru is among those to be cut because he did not impress during the half season at Monaco, unlike his earlier days at KAS Eupen and RSC Anderlecht of Belgium.

Consequently, though the 22-year-old Onyekuru’s contract with Monaco s originally meant to run until June 30, 2024, he s already thing of staying put at Gala, who reportedly want his loan deal extended until the end of next season, while additional information has it that he has been linked with a permanent switch to Olympiakos of Greece in recent days.

The coast is now clear to Onyekuru to take up one of two options already in front of him ahead of the summer transfer window, as he now looks officially bound to leave Monaco, where he was able to get only 160 minutes on the pitch, across just four appearances, during his time with the French Ligue 1 outfit.