Awoniyi: I Feel Very Great Helping My Team By Scoring Against Cologne 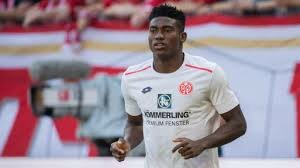 SV Mainz 05 of Germany striker, Taiwo Awoniyi has disclosed how great he felt being the one that helped his side romp back from two-goals down to pull off a sensational 2-2 draw away to Kingsley Ehizibue’s FC Cologne on Sunday,
megasportsarena.com reports.

Awoniyi got off the visiting team’s bench on Sunday to hit home his first ever goal in the German Bundesliga, and first for Die Nullfunfer, but the UAE 2013 FIFA U-17 World Cup gold medalist posted that the biggest piece of joy for him was that he helped his side secure an away draw on the very first weekend of the return to action after a forced suspension of action after COVID-19 forced the top-flight to be put on halt.

It turned into a very happy resumption outing for Awoniyi and his teammates, as Mainz are now four points away from relegation, having accumulated 27 points from 26 games, while Ehizibue’s Cologne are 10th with 33 points from the same number of matches.

Awoniyi will now be aiming for his second goal for Mainz in their next match, which will be at home against Ademola Lookman’s title-chasing RB Leipzig at Opel Arena, ahead of which he has stated delight with his first match back in action and expressed hope that he will keep getting better, considering that things have been thorny for him since arriving on loan from Liverpool of England in January.

Indeed, Awoniyi has not found the gong easy in his previous spells on loan from Liverpool with torrid days at FSV Frankfurt of Germany, NEC Nijmegen of Holland and AA Gent of Belgium, while two spells of bliss at Royal Excel Mouscron of Belgium were both cut short by his parent club deciding to unceremoniously change his base on both occasions.

He is now tang Sunday’s game as the much-awaited breakthrough he needed with Mainz, after nine months with his struggling side, as he inspired their comeback against The Billy Goats and became the second-youngest Nigerian to score in the Bundesliga – after Anthony Ujah made hay against VfB Stuttgart in November 2011.

After ending his drought with Achim Beierlorzer’s team, the 22-year-old Awony s yearning for more heroics in the coming weeks, even as he praised his teammates for their great fighting spirit by coming from behind to hold their hosts to a 2-2 draw at Mungersdorfer Stadium.

Awoniyi said: “I’m really happy about scoring my first goal for Mainz! We came back very well as a team and fought our way back into the match. I had the ball and I saw that I had some space to shoot. I feel good; it’s great to have helped the team by scoring that goal.”