Sheyi Ojo: Rangers’ Fans Gave Me Some Of My Best Moments In Life 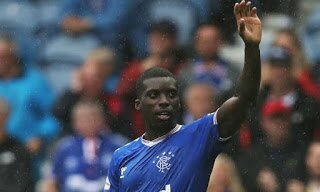 Glasgow Rangers of Scotland winger, Shey Ojo has reflected on the season he enjoyed with the team on loan from Liverpool of England, and concluded that The Gers’ fans gave him some of the best moments he has enjoyed in life, megasportsarena.com reports.

In what appears to be a valedictory speech to the Ibrox club, Ojo stressed that he has enjoyed every single minute of his stay in Glasgow, for which he is already holding a lot of emotions and nostalgia, as his loan spell from Anfield expires at the end of next month.

The 22-year-old winger, who was part of England’s winning team at the 2017 FIFA U20 World Cup, joined the Scottish Premiership side on a season-long loan last July, following which he got five goals and seven assists in 36 games across all competitions, thereby surpassing his previous tally during loan spells at Wigan Athletic, Wolverhampton Wanderers and Fulham of England, as well as Reims of France in the immediate past season before this.

As he takes a look back at his strides with Rangers the dark-skinned lad, who has been on the books of Liverpool since the age of 14, after starting out with MK Dons, and had been touted all along as one of the brightest prospects at Anfield, is now hoping on making a big impact when he returns to Merseyside, in order to get regular game time under The Reds’ boss, Jurgen Klopp.

Ojo took to social media to highlight the good time he had with Rangers and halt her supporters for encouraging him, even as he backed his post with a video highlighting his best moments with the team, and stated: “Best fans in the world no doubt. You guys gave me love & some moments in my life I’ll never forget. Thank you @RangersFC.”