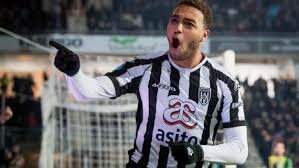 Heracles Almelo of Holland striker, Cyriel Dessers has received the green light to make a summer transfer switch to Galatasaray of Turkey, as officials at his modest club conceded that they will not be able to hold him beyond this season, megasportsarena.com reports.

With the Belgium-born new Super Eagles’ invitee having wowed the watching football world by emerging top scorer in the top-flight Dutch Eredivisie before the season was cancelled, he was surely bound to attract frenetic transfer attention from far and wide, among which has been confirmed to be coming from the Turkish champions, who currently have Henry Onyekuru on their cards.

However, with Onyekuru likely to be on his way back to his parent club, AS Monaco of France this summer, Galatasaray are long for an alternative and they have reportedly set the wheels in motion to sign Dessers.

A report by Turkish sports daily, Fanatik disclosed that The Lions’ coach, Fatih Terim is truly in awe of Dessers and has already approved a move by his Istanbul-based side to poach the lad from Almelo goal poacher and instructed the club to finalize the transfer.

It s now left to be seen if Almelo will eventually lose Dessers, who they barely managed to keep in the winter transfer market, after he was linked with Sporting Lisbon of Portugal, Cagliari of Italy and Celta de Vigo of Spain, but Heracles were not willing to do business with his suitors because they did not want to lose an important player in the middle of the season.

Indeed, the 25-year-old Dessers, who joined Heracles in the summer of 2019, after stops at OH Leuven, KSC Lokeren, NAC Breda and FC Utrecht, made a huge splash in the cancelled season, as he scored 18 goals in all competitions, including 15 in the Eredivisie, which made him the joint-top along with Feyenoord’s Steven Berghuis.