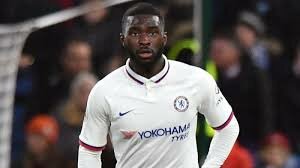 Chelsea of England defender, Fikayo Tomori is eagerly long forward to the restart of action in the English Premier League, as he wants to man the high level of performances he had before the season was forced on break by coronavirus, megasportsarena.com reports.

While affirming that he wants to enact great performances for The Blues once the season gets back into full steam, the Nigerian-born dark-skinned stopper added that he also wants to keep improving with every match, as he now keen competition in the squad means everyone’s shirt is always up for grabs.

The 22-year-old central defender, who was born in Canada, acknowledged that he worked hard to make the best of his breakthrough season at Stamford Bridge, where he is proving his mettle as an academy graduate, but admits there is still lots of work to be done.

Observers believe Tomori has already proven his potential across a series of previous loan spells, including one working under current Chelsea boss, Frank Lampard last season at Derby County n the English Championship, but the England international has garnered 22 appearances already n the highly-competitive EPL, where he aims to keep improving as the weeks go by.

Tomori added: “Having competition helps the team to improve because everyone wants to play. You know if you want to get in the team then you have to better than the person who’s got the shirt at that time so you have to take it from them.

“It was just about me feeling like I belonged and that I could play at this level. I had spent two-and-a-half years in the Championship and with Derby last season I managed to win Player of the Year and get to Wembley for the play-off final so I knew I’d had a good season.

“They won the Europa League the previous season so being able to come into that team and show myself, show the manager and the fans and my team-mates, show everyone that I could play at that level, was really important.

“I managed to do that in those early games and showcase what I could do and I’ve managed to carry that through. Now, it’s just about trying to maintain that level, not drop below it and keep on improving it.”