Oparanozie Blames Coronavirus For Her ‘Premature’ Exit From Guingamp 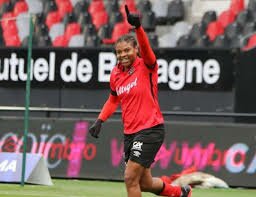 Nigeria’s women national team , Super Falcons’ former captain , Desire Oparanozie has refuted media reports that she was forced out of En Avant Guingamp of France , as she insists she had to leave ‘prematurely’ because coronavirus caused the season to be cancelled, megasportsarena.com.

Although she admitted her contract with the club was billed to end next month , the former Bayelsa Queen of Yenagoa and Delta Queens of Asaba attacker, insists it is not proper to say she was released by Guingamp , considering that the season n France did not end normally, but she only decided to move on because she had already spent six years with the club.

She went on to state during Mega Sports on Star 101.5 FM, Lagos that she is full of nothing but deep appreciation to the club’s management, players and fans , who she says made her feel at home since she joined them in 2014, after which she went on to make 106 appearances and scored 45 goals for the French women’s top-flight league side.

The 26-year-old Oparanozie, who joined the French Feminine side in 2014, after a spell in Turkey with Ataşehir Belediyespor, added that she is also happy for the improvements playing for the club brought for her game, as she went on to captain Nigeria at the 2019 FIFA Women’s World Cup in the same country, and the Falcons passed the group stage for the first time in 20 years

Before her move to Atasehir, Oparanozie started her professional career in Europe with a loan deal at another Turkish side, Luleburgaz 39 Spor in 2011, when she moved there from Delta Queens, where she later returned after an unsuccessful two-month spell.

However, her fine showing at the 2012 FIFA U20 Women’s World Cup in Japan, where she got three goals to help the Falconets emerged fourth, saw her earn a deal with Rossiyanka of Russia, for which she scored twice in 11 games, one of which was in her first UEFA Women’s Champions League outing, in a round of 16 first leg tie away to against Sparta Prague on November 1, 2012.

After a season, she left the Russian side to Wolfsburg of Germany on a two-year deal, but only managed to feature in one match for the senior team and returned to Turkey with Atasehir after being relegated to the B-team, then got a massive transformation to her quality during her time at Guingamp, where she was named captain for the season, during which she scored six goals in 12 matches, including a 40 metre stunner against Paris FC and led Gungamp to a semi-final spot in the French Women’s Cup before the COVID-19 outbreak.

However, while The Telegram reported last week that Guingamp parted ways with her and five other players, after the club decided against renewing their contracts, Oparanozie insists the news was misleading, stressing that it was her decision to move on and, now that she is a free agent, she hopes to secure a new club in the coming weeks.

Oparanozie stated: “I was not sent away from Guingamp, but coronavirus only caused me to leave earlier than scheduled. My contract will officially end next month, but the cancellation of football in France, because of coronavirus, means that I will not be able to play for the club again, unless I get a new contract.

“However, having spent six years with them already, I felt that I have spent too much time there already, and I decided to face a new challenge elsewhere. I don’t know where people got the stores they were writing, that I was sent away by the club.

“That is not true. It’s just that my contract will end in June, but there are no matches again up till that time, so I decided to leave early, in order to start long for another club. In fact, I already have many offers to choose from.”