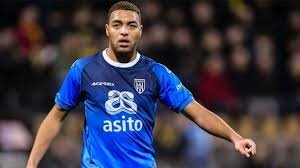 Heracles Almelo of Holland sensation, Cyriel Dessers is drawing strong summer transfer attention from Racing Genk of Belgium, as the club that shot Wilfred Onyinyen Ndidi to stardom are said to have tabled for the new Super Eagles’ invitee, megasportsarena.com reports.

With Dessers having hit amazing form that saw him emerge top scorer in the top-flight Dutch Eredivisie last season, he is now wanted back in the country of his birth, where he previously played for SK Lokeren and OHL before he moved to Holland.

Dessers is now top target for Genk, who currently have the Nigerian duo of Paul Onuachu and Stephen Odey on their cards, hope to strengthen their strike force ahead of next season, but they will have to meet up to the asking price of six million Euros that Heracles have placed on the Almelo striker.

Details of the report by Het Belang van Limburg, however, indicate that the Belgian Jupiter League side are quite determined to get Dessers, who finished as joint-top scorer in the recently cancelled Dutch season with 15 goals.

This is despite earlier report linking Dessers with Galatasaray of Turkey and AS Torino of Italy, as Genk want to fill a void caused by the departure of Tanzania captain, Ally Samatta to Aston Villa of England, with a source close to the club adding: “Cyriel is young, Belgian, versatile and scores goals and he proved that last season. He also is from Limburg. So, he has the ideal profile.”