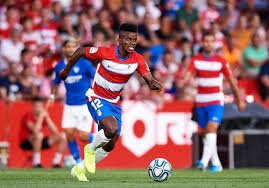 UD Granada of Spain midfielder, Ramon Azeez has cast a look back at his early days in Europe where he says a ‘miraculous’ breakthrough came for him during deliberations over which country he would move to after captaining Nigeria’s cadet national team, Golden Eaglets to silver at the 2009 FIFA U-17 World Cup in Abuja, megasportsarena.com reports.

Although the lad, who grew up in Ikotun area of Lagos but got his breakthrough playing for a youth club at the suburb of Agege, could not lead the Eaglets to gold on home soil, he had done enough to catch the eye of watching scouts, and several openings soon came his way n England.

Among the offers on his table from Queensland were Arsenal and Manchester City, but both clubs delayed sealing a concrete deal for him, which left clouds hanging over his future up till a year after his personal heroics in the Eaglets’ squad that also had Kenneth Omeruo, Eddy Ogenyi Onazi, Emmanuel Sanni and Olarewaju Kayode in their ranks.

He recounted how he was recommended to Man City on the strength of him having emerged as the third best player at Nigeria 2009, but the deal eventually failed to materialize in 2010 due to a work permit obstacle, which left Olympique Lyon of France and UD Almeria of Spain to battle for his signature, but Azeez says it took a miracle for the Spanish side to finally hook him.

However, the product of Future Pro Academy, who also captained Nigeria’s youth national team, Flying Eagles at the 2011 FIFA U20 World Cup in Colombia and then played for the senor squad three years later at the World Cup in Brazil, admitted that starring at the Cadet Mundial provided him with a solid foundation for his career.

“Then I got a call from my uncle that people from Spain were in touch, so I just had to leave England to go back to Nigeria. They sent my pre-contract to Nigeria, I signed the pre-contract in Nigeria, then we sent it back to Spain, before I went to the embassy to get my papers.”