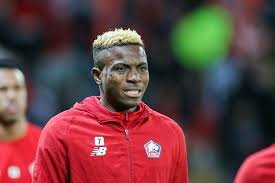 Lille Metropole of France striker, Victor Osimhen’s agent is said to be considering an ambitious £60m offer from Liverpool of England, despite the Super Eagles’ star’s club insisting he is not for sale, megasportsarena.com reports.

Lille’s president, Gerard Lopez recently declared that the club rejected a similar offer for the youngster, with a deal said to be worth €75m said to have been put on the table for him by an unnamed club in the English Premier League, but Liverpool now look ready to try their luck in making a spirited bid for the same player.

Osimhen has been outstanding for LOSC in his first season with the French Ligue 1 side, thereby attracting attention from Liverpool and a host other clubs, including their EPL rivals Arsenal, Chelsea, Leicester City, Tottenham Hotspur and Manchester United.

AS Napoli of Italy are also said to have joined the race with their Serie A rivals, Inter Milan, AC Milan, Juventus and Sampdoria, with Real Madrid, Barcelona, Valencia and Sevilla of Spain also reportedly on the queue, the upper hand for now appears to be with Liverpool, are being linked with a £60m offer for the Chile 2015 FIFA U-17 World Cup highest goals scorer.

The odds are now dangling wildly round Osimhen and his agent, as they consider all options that are currently available to the youngster, even as Sportmediaset reporter, Diego De Lucas has thrown more light on interest coming from Napoli, while also disclosing that Tottenham have made a similar offer.