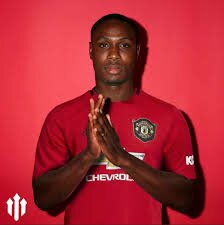 Manchester United of England striker, Odion Jude Ighalo has made a special appeal to his parent club, Shanghai Greenland Shenhua to allow him stay with the English Premier League club beyond the expiration of his loan deal this weekend,megasportsarena.com reports.

The short-term loan agreement that took Ighalo to Old Trafford from Shanghai is scheduled to run out this Sunday, May 31, and the Chinese Super League club want him back, to commence training ahead of the commencement of action for the season, but the former Super Eagles’ hitman is begging them to let him stay put.

Shenhua already gave United a concession of buying Ighalo outright for 20 million pounds, but The Red Devils have been rendered financially lame by the effects of coronavirus and, although a report by Tribal Football disclosed that the striker is fighting to stay in Manchester, officials in The Oriental Nation insist that will only happen if the EPL side pay up in full.

British tabloid, The Mirror added that Ighalo, who joined his teammates at United’s Aon Training Complex on Tuesday, will now plead with Shenhua to allow him extend his stay, as talks broke down between them, with the Chinese side pointing out that May 31 should have marked the end of the EPL season normally, had coronavirus not caused a disruption of the flow.

However, with Ighalo so keen to continue living the dream of playing for Man U, which he has held since he was a kid, the former Prime FC of Oshogbo, Julius Berger FC of Lagos, Lyn Oslo of Norway, Granada of Spain, Udinese of Italy, Watford of England and Changchun Yatai of China star is now due to speak to Shenhua himself in a bid to convince them to change their minds.

Alarmingly, many observers fear Ighalo’s chances are chances of succeeding with his appeal are very slim, considering that Shenhua have not played since December due to their domestic season being postponed as a result of coronavirus, and they now want to prepare well for the delayed kick-off, which was due to start in February, but will now begin next month.

Nonetheless, United’s boss, Ole Gunnar Solskjaer hinted that United will continue talks with Shenhua over extending Ighalo’s loan deal, as he admits he is keen on seeing the striker end the Premier League season, which is billed to resume n the middle of June.

Solskjaer told United’s website: “The loan deal went until the end of May now, so obviously he’s supposed to be going back. We’re in dialogue. They’ve been great towards us, his club, and allowed him to play for his dream club.

“It’s been a dream for him and hopefully he can finish off what he started, hopefully with a trophy for us. At the moment, nothing has been agreed. Their league is going to get started soon so we’re just waiting to see.”