Alex Iwobi: I Learnt So Much Playing Alongside Mikel For Four Years 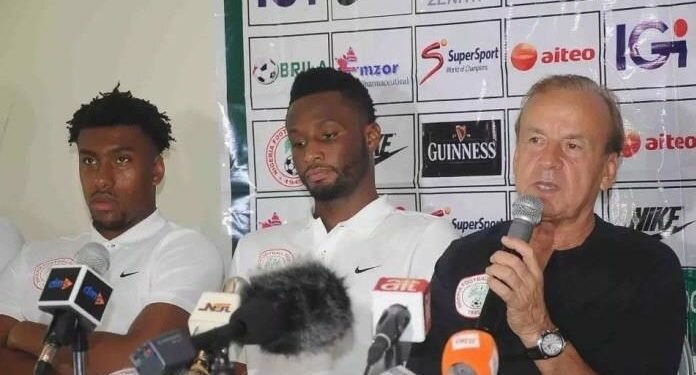 Everton of England midfielder, Alex Iwobi is singing praises for former Super Eagles’ captain, John Mikel Obi, who he says was a sheer delight for him playing together with as a teammate for four years in the Nigerian national teamV megasportsarena.com reports.

While many critics believe Iwobi has not been able to step into the vacuum created by Mikel’s exit from the Eagles, as the former Arsenal of England star has been largely inconsistent in his game, the youngster says he indeed learnt a lot from the former Chelsea icon.

Iwobi has since gone on to play various roles in midfield for club and country, as a winger down ether side, through the middle as a playmaker or behind the strikers, yet Nigerians still believe they are yet to find an ideal replacement for Mikel, even as Glasgow Rangers of Scotland rookie, Joe Aribo appears to be stepping aboard in style.

The advent of Aribo may have turned attention away from Iwobi as the likely successor to Mikel, but the 24-year-old Everton lad has hinted that he will still have his place in the Eagles, because he learnt a lot of tricks of the game by watching the former captain and rubbing shoulders with him in the national team.

Indeed, of the 14 years the 33-year-old Mikel spent with the Eagles before his retirement from international duty, after captaining the team to their eighth bronze medal at the Africa Cup of Nations from the 2019 edition in Egypt, Iwobi was privileged to be with ‘The Catalyst’ for four of those years, during which time he learnt to keep the ball from opponents while under pressure.

“I have learnt a lot from Mikel because we play similar positions. Whenever I’m called I play behind the striker, that’s where he likes to play. In training, whilst watching him on the pitch, whilst I’m on the bench watching him, I’ve always learned, the way he’s physically capable to keep the ball in tight situations.

“Playing in African culture there’s a lot more physicality, there are a lot more strong duels, the way he’s able to use his body is something I have picked up and try to add to my game,” Iwobi declared during a live chat on Instagram.