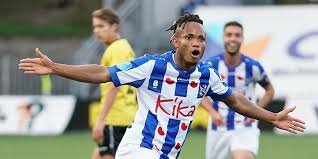 SC Heerenveen of Holland winger, Chidera Ejuke has received a price tag of 10m euro from his club, as the Dutch Eredivisie side aim to cash in on his stunning form in the recently cancelled season, megasportsarena.com reports.

Ejuke was in his best form since turning professional, as the lad that was dropped from both the 2015 and 2017 sets of Nigeria’s cadet national team, Golden Eaglets made good his chances with the club he joined last summer from Valarenga of Norway.

With the youngster popping into all headlines during the course of the season and ending it on a high with rave reviews and remarkable statistics, he was bound to draw lavish transfer interest from far and wide, which Heerenveen are now aiming to draw to their advantage.

With a high probability that Ejuke will be on his way out of Holland this summer, HSC have moved fast to reap a huge profit on him by placing a staggering 10 million Euros on the youngster, though they spent only two million Euros to get the 22-year-old from Valerenga.

Although Ejuke may have already done enough during the first season of his four-year-contract with Heerenveen, and the club want to cash in on what he has achieved, a report indicates that they may have to lower their valuation to between six or seven million Euros, due to current economic woes caused by the novel coronavirus pandemic across the world.

Dramatically, though, two of Holland’s leading clubs, Ajax Amsterdam and Feyenoord as well as Olympique Marseille of France have continuously been linked with Ejuke, which has put HSC on red alert about the likelihood of them losing the fast-rising youngster this summer.

Although his agent, Atta Aneke told SCORENigeria Marseille have not been discussing a transfer move for the player, a credible source insists the French Ligue 1 club were actually prepared to table 10 million Euros for the exciting forward.