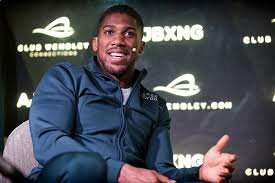 Nigerian-born world heavyweight boxing champion, Anthony Olaseni Oluwafemi Joshua has been hit with another threat in his hope of tang on fellow-Brit Tyson Fury in a megabucks unification fight, as his mandatory challenger, Kubrat Pulev says he will not step aside, megasportsarfena.com reports.

‘AJ’ is hoping on Pulev giving up his mandate in order to allow the all-British clash happen, but the Bulgarian heavyweight, who is the international Boxing Federation (IBF) mandatory challenger, insists he will not step aside for anything n the world.

Rather than allow Joshua have his way with Fury, Pulev said he would not accept a proposal to step aside and give Fury an early chance to take on Joshua, who was initially due to fight the Bulgarian at Cardiff’s Principality Stadium in Wales, back n October 2017, only for the challenger to withdraw after suffering a shoulder injury in sparring.

That came three years after Pulev challenged for the IBF world heavyweight title in 2014, but lost to Wladimir Klitschko in Hamburg, Germany on a fifth-round knockout and, though the 39-year-old Bulgarian had been scheduled to meet Joshua on June 20, the fight was postponed due to COVID-19 outbreak, but the champ’s with promoter, Eddie Hearn wants to dump him again.

Such s the prospect of Pulev missing out on his title target, with Hearn floating an idea for two Brits to clash n a unification bout that has the strong fancy of Joshua, who believes a blockbuster fight with Fury, who is also set to meet Deontay Wilder in a rematch this year, after a seventh round win in February, was needed to determine a single dominant champion in the division.

However, in contrast with Joshua’s wish, Pulev (The Cobra) insists there is just no chance of him accepting a compromise and the former European amateur super-heavyweight champion, who had already set his mind on causing an upset at Tottenham Hotspur Stadium in London, said ‘AJ’ was not acting like a real world champion.
That is despite the 30-year-old Joshua becoming a two-time world champ when he defeated Mexican-American, Andy Ruiz Jr in a rematch on December 7 in Saudi Arabia to win back his IBF, WBA, WBO and IBO titles.

Pulev said: “I wouldn’t accept it. I did it once when I didn’t have to do it for him (Joshua) to have his second match against Ruiz Jr. Everything was against IBF’s rules, but I compromised. I can’t understand why we are still postponing instead of fixing a date and venue and getting to work? I can’t wait to win this fight.”

“I see how people are afraid of me and are trying to face someone else before me. That’s not how a real world champion should act. Even Mike Tyson and Evander Holyfield are coming back to the game to show that they are real warriors, not like him.

“Enough is enough. A year has passed, and they always have a reason to postpone, not to fight against me. There are two options. You either fight or vacate the title.”