Ehizibue’s Club Draw At Home, After Fans Protest Against Resumption 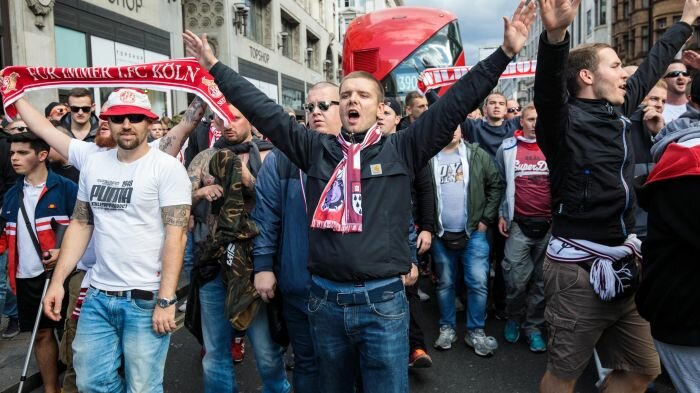 FC Cologne of Germany defender, Kingsley Ehizibue and his teammates were faced with a major distraction before their first match of the resumed season n the German Bundesliga, as football fans from across the country protested against the restart of action n the league, megasportsarena.com reports.

The pre-match protests, which the fans staged to warn about the possible consequences of playing matches in the midst of continued worries about coronavirus, gravely affected Ehizibue and his teammates, such that could only settle for a 2-2 draw against Taiwo Awoniyi’s SV Mainz.

Indeed, while Ehizibue spent 90 minutes on Cologne’s bench, his teammates gave up a two-goal lead n the encounter, which saw Awoniyi net one of the comeback goals for the visitors, as the home team appeared bothered that German football fans showed their anger that matches were being staged behind closed doors.

In trying to press home their grievances, the fans embarked upon socially distant protests outside Cologne’s RheinEnergieStadion on Sunday, as professional football in Germany was played for the first time since the coronavirus outbreak, but supporters were not allowed to attend the fixtures due to a risk of further spreading COVID-19.

Unimpressed fans put up posters and even laid out a sofa outside the ground to state their grief, with graffiti reading ‘Stadium instead of Sofa! Against ghost games!’ sprayed in red on seats and chars outside the empty stadium, while posters displayed ‘Our money is more important than your health’ to argue that keeping football financially stable is bigger than the fear of COVID-19.

Despite the protest that preceded their home draw, though, Ehizibue’s club earlier created a brightly-coloured motif in one of the stands at RheinEnergieStadion, using scarfs and shirts lent by supporters, as they wanted to mark the return in a unique way while allowing fans to show their loyalty through other means given they are unable to attend.

A pre-match report read: “Home, away, and third shirts have been stretched over a section of seats in the middle of one of the stands to form the letters ‘FC’, with the German club locally referred to as ‘Effzeh’.

“The motif, known as a ‘geister-choreo’, or ‘ghost-choreo’ in English, took four hours to complete by Cologne staff on Saturday ahead of the club’s return to league football after a two-month hiatus. Cologne, who are currently 10th in the Bundesliga, will be without their goat mascot Hennes IX due to strict hygiene rules that have been put in place for football’s return.”