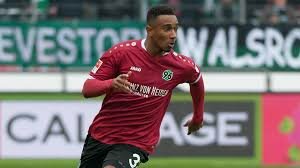 Augsburg of Germany striker, Noah Joel Sarenren Bazee is cherishing the delight of scoring his first ever goal in the German Bundesliga, as he hit home one as a second half substitute in his side’s 3-0 spanking of their hosts, Schalke 04, megasportsarena.com reports.

While the former Super Eagles’ invitee got off the visitors’ bench in the 59th minute of play, his Nigerian-born teammate, Felix Uduokhai got full duration action from the fixture at Veltins-Arena in Gelsenkirchen, and ended the game with very high ratings on all pundits’ scorecards.

It started pretty well for Bazee and Uduokhai, as the visitors took the lead after just six minutes through Eduard Loewen and the Nigerian-born striker then made it 2-0 n the 76th minute when he rifled home into the bottom corner after some poor defending from the Schalke players.

Things turned from bad to worse for the host, when Sergio Cordova netted Augsburg’s third goal on 90 minutes and it was delight all the way for the 23-year-old Bazee, who waited four years to net his first goal in the Bundesliga, after making his German top-flight bow against Hertha Berlin on April 8, 2016.

While the former Hannover 96 youth team player marked his 19th Bundesliga appearance with a well-taken goal against Schalke, the other big talking point from the game was for his team mate and fellow-Nigerian-born player, Felix Uduokhai, who was nominated for Augsburg’s man of the match award on the back of his outstanding performance in their stunning away win.

Uduokhai, who was nominated for the award alongside Eduard Löwen, Tin Jedvaj and Philipp Max returned to Augsburg’s starting line-up, after the former Germany under-20 international started on the bench the previous weekend against his parent club, VfL Wolfsburg.

Stats provided by Whoscored showed that the 22-year-old Uduokhai notched up a game-high eight clearances to help his side maintain an amazing clean sheet on the road, and their first of the season in four games; as he added two interceptions, two tackles, blocked two shots and did not commit any foul over the course of ninety minutes he was in action.

The early voting pattern for the award looked good for Uduokhai, who moved to Augsburg on loan from Wolfsburg last August, in search of regular playing time, as he had already garnered 14.7 percent of the polls before midnight.