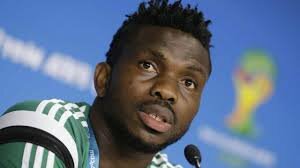 Former Super Eagles’ captain, Joseph Ikpo Yobo has held his first meeting with the Nigerian national team’s technical crew through an online conference, during which he was formally welcomed to the squad, megasportsarena.com reports.

Megasportsarena.com gathered that the virtual meeting that held through video links involved all coaches and backroom staff of the Eagles in deliberations over their immediate plans for the team, which is expected to get very busy once the forced break occasioned by coronavirus ends.

The team had initially been billed to play two matches in March and another couple in June to wrap up the qualifiers to next year’s Africa Cup of Nations in Cameroon, after which they will then focus on the 2022 World Cup elimination series at the start of September, but everything had to be put on hold due to the COVID-19 pandemic.

However, with the scourge gradually easing off and football action already returning to some of Europe’s major leagues and other making elaborate plans to get things back in motion as the weeks go by, the Eagles’ crew deemed it fit to commence tentative plans towards resumption.

Consequently, the crew had a video meeting at the weekend, which at a point also included the president of Nigeria Football Federation (NFF), all the coaches, medical personnel and backroom staff put heads together to fashion out the way forward once the go-ahead comes for matches.

A post on social media revealed that the online deliberations of the Eagles’ technical crew also allowed room for head coach, Gernot Rohr’s scouts to chip in their own views as well, while the assistant coaches, including Yobo, got opportunities to add suggestions on the way forward.

Details of the report as posted on Twitter via @tayOgunseye disclosed: “The @NGSuperEagles technical crew had a meeting via video conferencing on Sunday…Joseph Yobo was welcomed officially to the team at the meeting. The scouts and assistant coaches were able to provide …”