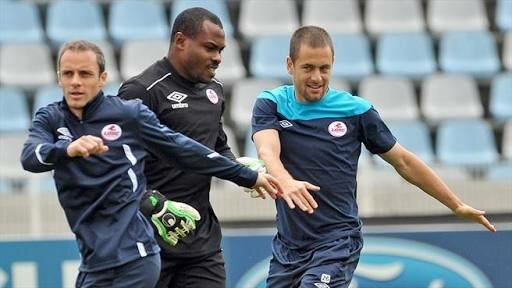 Former Super Eagles’ goalkeeper and captain, Vincent Enyeama has been granted his first coaching job in the country where he made high marks plying his trade, as he is now set to work as the official trainer of shot-stoppers at a lower division club in France, megasportsarena.com gathered.

It is the first step into coaching and managerial duties for Enyeama, who has been clubless since his acrimonious departure from Lille Metropole of France in 2018 and, though he tried to get his career back on track, his trials with Sporting Dijon fell short, hence his decision to accept the job at Iris Club de Croix.

The South Africa 2010 and Brazil 2014 World Cup star has now lined up with the modest club in Hauts-de-France to train all keepers of their reserves’ squad and under-16 teams, thereby confirming a move into tactical duties for the 37-year-old 2013 Africa Cup of Nations winner.

He last played a competitive match in 2018, during the twilight of his time with Lille and, though he had also recently been linked with a move to either Kaizer Chiefs or Orlando Pirates of South Africa, Enyeama appears to have decided instead to hang his gloves and go into coaching.

The former Awa United of Uyo, Enyimba of Aba as well as ex-Maccabi Haifa and Maccabi Tel Aviv shot-stopper will now begin gaining experience in his new vocation at Iris Club de Croix, who play in the French Championnat National 3, the fifth-tier of football in France.

The club used their official Facebook account to confirm that Enyeama has taken up a coaching role with their developmental unit, while confirming their job specifics for the veteran keeper, who left Lille in 2018, after making 108 league appearances for the club, after which he trained with Dijon in July 2019 but was not offered a contract by the club.

Enyeama, who also made 101 appearances for Nigeria, before hastily retiring in 2016, after falling out with the former coach, Sunday Ogorchukwu Oliseh, also featured for Bnei Yehuda of Israel, but will now work on the sidelines with Iris, who suffered relegation to Championnat National 3, when the 2019/20 season was abruptly ended early due to the COVID-19 pandemic.