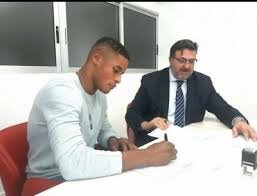 Sociedad Deportiva Huesca of Spain attacker, Kevin Carlos Omoruyi has gained instant reward for his efforts in the newly promoted club’s youth teams, as he has now gained a full contract with their main squad that will compete next season in the top-flight Spanish LaLiga.

Okoroji is bound to line out alongside Golden Eaglets’ Chile 2015 FIFA U-17 World Cup-winning captain, Kelechi Nwakali next season in LaLiga, ahead of which the Nigerian-born youngster is already thinking big and pledged to give his very best for the team.

Megasportsarena.com reports that the 19-year-old declared as much when Huesca confirmed his elevated status on their official website, while noting that the Spain-born lad has extended his collaboration with the club by putting pen to paper on a new contract that will run until 2023.

It is a marked improvement for Omoruyi, who represented Huesca in the Alto Aragonese Youth of Honor, during which he struck seven goals in twenty-five starts, and was called to train with the first team following the resumption of the season, after it had been initially suspended due to the coronavirus pandemic.

The main team’s coach, Míchel Sánchez included Omoruyi in Huesca’s matchday squads for the last two games of the season, against Numancia and Real Sporting de Gijón, thereby setting the stage for eventual elevation of the youngster, who joined Huesca from Peñas Oscenses in 2016.