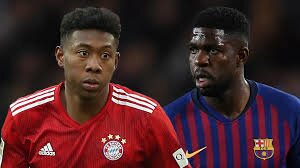 Another angle has emerged in the thorny summer transfer saga of Bayern Munich of Germany’s Nigerian-born left-back, David Olatokunbo Alaba, as he is reportedly being lined up in a likely swap agreement that should see Samuel Umtiti move from Barcelona of Spain to The Bavarians.

While the English Premier League duo of Chelsea and Manchester City appear to have cooled their interest in the Austria international defender, Alaba is now said to be a top target for Barca, who are apparently set to take advantage of the star’s continued stall on talks with Bayern over terms of a new contract.

Megasportsarena.com gathered that Alaba’s current deal expires next summer and Mundo Deportivo reports that he could be on his way to Spain soon, as Barca, who also made an attempt to sign him last year and now thinking of including Umtiti in their second offer.

That has become their next tact, as Bayern turned down their previous effort, but the setting and circumstances have now changed, with less than a year to run on Alaba’s current deal, such that Bayern might be prepared to sell if they cannot convince him to put pen on paper.

Interestingly, it has also emerged that Alaba’s minders had offered the defender to Barca; and Umtiti could again come into the equation, considering that the France defender has already been transfer-listed ahead of the summer market.