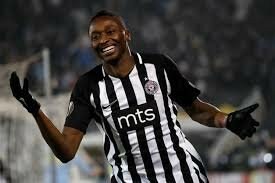 Partizan Belgrade of Serbia striker, Sadiq Umar will cost a princely sum of 20m Euro for any club that is willing to step forward with an official bid for his signature in a full transfer this summer, megasportsarena.com reports.

This is the down-to-earth verdict of Partizan’s coach, Savo Milosevic, who revealed how much the East European nation club values Umar, who is Nigeria’s current highest goals contributor in any European top-flight league this season.

The Serbian football tactician stressed that they are not ready to let go of Umar, who he went on to declare would be worth between 40 and 50 million euro in the coming years, hence their determination to keep hold of the 23-year-old attacker.

Incidentally, Umar, who joined Partizan from AS Roma of Italy, after failing to hit top marks on loan to the Italian duo of Spezia and Bologna as well as Glasgow Rangers of Scotland, has already been linked Manchester United of England, Valencia of Spain, AC Milan of Italy and CSKA Moscow of Russia, but Milosevic says they do not intend selling him.

That has informed their high-priced valuation of the lanky lad, who struck a rain of sizzlers in helping Nigeria’s under-23 team to bronze at Rio 2016 Olympic Games in Brazil, and already has his feet in 34 goals spread across 39 matches, including 25 in the Serbian Super Liga.

However, while Milosevic stressed that Partizan value Umar at 20 million Euro, he conceded that they might not be able to get exactly that amount on any serious transfer bid that comes for him, but affirmed that they will not consider any offer that is less than 10 million euro.

Milosevic told Zurnal: “Sadiq’s real price at this moment, having in mind the player’s profile, is higher than in the winter. Then I said we wouldn’t let him go for less than 15 million euro, now I say it costs 20! I’m not saying that we will be able to take that money, but we will not even consider offers under 10 million euro.”