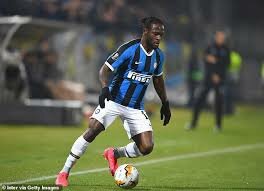 Inter Milan of Italy winger, Victor Moses is counting the blessings of his first season in the Italian Serie A, but says he has already turned his focus on his club’s return to the continental terrain this week, as they go out for battle in search of a ticket into the UEFA Europa League quarter-finals, megasportsarena.com reports.

The former Super Eagles’ star, who is on loan at Inter from Chelsea of England, also expressed satisfaction with The Nerazzurri’s 2-0 win away to Atalanta in their last match of the season this past Saturday, and enthused that it will serve a morale booster for their continental campaign, with a round of 16 clash hanging on the horizon this Wednesday.

Although he played Saturday’s game only as a 90th minute substitute for Ashley Young, which is another reflection of how he has struggled for relevance, form and fitness this season, Moses feels satisfied with his overall contributions to the club’s campaign, with a verdict that all his teammates and the technical crew gave the very best they could.

He also gave words of appreciation to the Milan-based club’s fans for backing the team all the way throughout the season, in which they finished second on the Serie A’s final standings on the log, thereby qualifying again for next season in the same Europa League, which he again hopes to participate in should he be able to remain with the club beyond this summer.

That prospect is currently debatable, as he come to the end of his loan spell from Chelsea and The Blues, who previously sent him in similar deals to Liverpool, West Ham United and Stoke City of England as well as Fernebahce of Turkey, want him back at Stamford Bridge, amidst speculation that he could eventually be sold because his contract ends next summer.

All that, though, is not bothering Moses for now, as he wants to only concentrate on helping Inter in this week’s Europe League battle with Getafe of Spain, and he took to social media to reveal the enthusiasm with which he is heading into the game, following a successful season on the domestic front and adequate backing from the fans.

Moses, who played for Crystal Palace and Wigan Athletic of England before joining Chelsea in 2012, posted: “Good 2-0 win, Thanks to all of our amazing fans for your support this season! All focus on the Europa League now 💪🏿.”