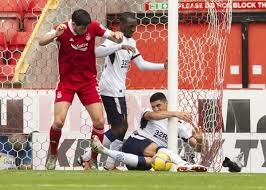 Glasgow Rangers of Scotland defender, Leon Aderemi Balogun has parried reports about what appeared to be an injury blow he suffered during his very first match for the club he joined close to the end of last month, megasportsarena.com reports.

Balogun was in action with The Gers only seven days after he arrived at Ibrox Stadium as a free agent, following the end of his short term contract at Wigan Athletic of England, which he first joined in January on loan from top-flight side, Brighton & Hove Albion.

It was reminiscent of what happened to him when he ran into a pitch side advertisement board during his debut with the Super Eagles against Mexico in 2014 and was afterwards in crutches for several weeks, following which several fitness issues later ruled him out of the World Cup in Brazil; with similar setbacks also occurring for him over the years at club and national levels.

However, the notorious injury-prone status of the Germany-born Super Eagles’ stopper seemed to resurface when he collided with a post during Saturday’s debut against Aberdeen on the first day of the new season in the Scottish Premiership, and worries resurfaced about the defender’s fitness levels moving forward.

Balogun, though, insists he is hale and hearty after he appeared to suffer a bout of concussion following his collision with the post during the encounter away to Aberdeen, which his side won 1-0 at Pittodrie Stadium; especially as he went on to feature throughout the encounter.

The 32-year-old former star of Werder Bremen, Fortuna Dusseldorf, Darmstadt and SV Mainz of Germany went on to assure that he is not suffering from any injury and expressed delight that he was able to help Rangers secure victory over The Dons on his debut appearance, just few days after he moved to Ibrox Stadium, following the expiration of his contract with The Latics.

Rangers’ boss, Steven Gerrard surprisingly gave Balogun a starting role in The Gers’ first game of the new Scottish Premiership season; and match pundits were unanimous that the experienced mulatto stopper delivered solid defensive performances that helped his side keep a clean sheet, with some crucial clearances, intercepting headers and attack-launching passes.

He also thanked his teammates, especially Connor Goldson, for helping him settle quickly at the club and expressed his appreciation to the Rangers fans for the warm welcome he received from them upon his arrival.

Dramatically, information spread soon after that Balogun suffered a relapse of the knock he got during the match and fears emerged that he could be ruled out of his team’s next game, but the star with a German mother and Nigerian father says he recovered from the pain after taking a mild dose of medication to ward off the discomfort and stressed that he was not injured.

Balogun disclosed: “I took some tablets to keep the headache down but I carried on. I don’t think I suffered any major concussion or anything which is the most important thing. I got a few headers in after that as well so there is no need to worry.

“We are happy with the win. Obviously, it was my first game and my welcome to Scottish football and it could hardly have gone any better – and I think any harder as well. I have had similar games before in the Bundesliga, the Premier League and also the Championship – it was very direct but you just have to adapt.

“The second half was maybe not exactly what we wanted the game to be and to look like, but we are happy with the win and the clean sheet as well. The lads did a great job in helping me to adjust through the whole week I have trained and it has been fun. It has been big! When I signed on Friday, everything was a bit hectic so I had to go back to Manchester to get some stuff.”