Victor Osimhen To Commence Training Officially With Napoli In September 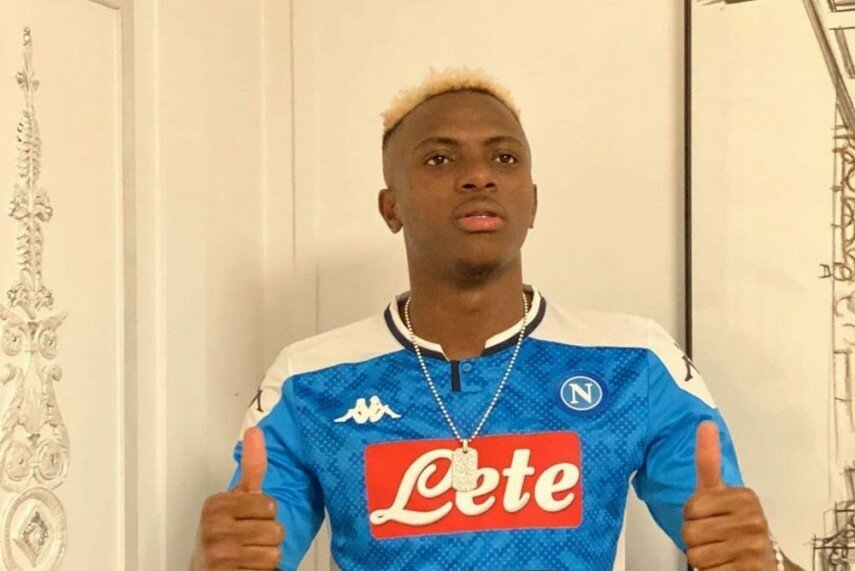 New signing at SSC Napoli of Italy, Victor Osimhen has received an arrival date in September for him to formally start activities with the club he signed the dotted lines with last week, megasportsarena.com reports.

With the long-drawn summer transfer saga eventually coming to a close, after confirmation of the sealed deal came from both Napoli and Osimhen’s former club, Lille Metropole of France, the Super Eagles’ rookie is now billed to commence pre-season training with his new teammates at the start of next month.

This was gathered from a report by Sky Sport Italia, which reported that Osimhen’s aides will be in Naples on Tuesday to commence a hunt around for an apartment where the Chile 2015 FIFA U-17 World Cup top scorer will reside during his early days with the Italian Serie A club.

It was learnt further that while the striker’s mentors are billed to begin shopping for a suitable house at the start of this week for the former VfL Wolfsburg of Germany and Sporting Charleroi of Belgium star, Osimhen is not expected to arrive until September, when he is due to officially join the team at their base in the city of Naples.

This is sequel to Napoli’s official confirmation of their signing of Osimhen from Lille, who also released a formal statement with details about the lad’s five-year contract with the Naples-based Italian club.

Napoli’s club president, Aurelio De Laurentiis added that he and everyone at the club are glad to finally announce their signing of Osimhen, who Lille bought from Charleroi for €14m last summer, after which he got 18 goals and six assists in 38 games for the French Ligue 1 side this season.

The 21-year-old Super Eagles striker becomes the most expensive Nigerian and African player of all time, reportedly at €60m including bonuses, while goalkeeper Orestis Karnezis moves in the opposite direction to Lille as part of the deal.

Osimhen, who passed his medical in Rome on July 18 and will be presented to the media in Naples after his summer holiday, is also the most expensive signing in Napoli’s history, a record that was set last summer by Hirving Lozano, when he arrived from PSV Eindhoven of Holland on a basic fee of €38m.

Before sealing the move to Napoli, Osimhen had been linked with several top European clubs following his impressive goals scoring season, including Chelsea, Manchester United, Arsenal, Tottenham Hotspur and Liverpool, although he will appear in Serie A in the 2020-21 campaign.

The lanky youngster, who has 10 caps and four goals for Nigeria, first moved to Europe in 2017 with Wolfsburg in the German Bundesliga, before moving to Charleroi, initially on loan and then in a permanent transfer.

A lot is expected of the fast-rising 21-year-old hitman, who is now billed to lead Napoli’s attack next season, as they look to return to the UEFA Champions League that they have missed this year, since they will finish only seventh in Serie A, although they have guaranteed qualification for the UEFA Europa League group stage by winning Coppa Italia.

Lille took to the social media to wish Osimhen well in his latest soccer adventure with Napoli, as the French Ligue 1 club posted: “We’d like to extend our heartfelt thanks to @victorosimhen9 and wish this Super Eagle Flag of Nigeria the very best of #LOSC luck in his new adventure with @en_sscnapoli;” while the Italian syde stated: “SSC Napoli are delighted to announce the signing of Victor Osimhen from Lille on a permanent transfer.”

On his part, De Laurentiis confirmed that Osimhen is set to garner a total package of €70m Euro over five years, with the deal potentially rising to €100m Euro when bonuses, adds-on and total wages are factored; as his team doled out more than Arsenal of England paid Lille for Nicolas Pepe a year ago and Osimhen moved in from Charleroi as his replacement.

De Laurentiis told Sky Sport Italia: “We’d been following Osimhen for some time. Both (Napoli’s sporting director, Cristiano) Giuntoli and (the coach, Genaro) Gattuso wanted him, and they convinced me to sacrifice €70m.

“With bonuses it can rise to €80m, and if you consider the wages which rise over the course of the deal overall this is a €100m+ deal. He is not a player we are expecting to be ready right away. He is not a 25-30 goal scorer, but he should bring an extra element of great play to the team, scoring and providing for his teammates.

“Milik has always been on the market. Since I met him I’ve been asking him to renew his contract, but he just looks at me and doesn’t reply. So you should be aware that he’s leaving. He’ll go to the highest bidder, because I won’t make a discount for anyone. Otherwise he risks staying at Napoli and probably won’t fit in the manager’s plans.”

Osimhen burst into the spotlight at the 2015 FIFA U-17 World Cup in Chile, where he was the top scorer in helping while the Golden Eaglets win the cup, as the then-16-year-old attacker scored an eternal record 10 goals, netting in every one of Nigeria’s games, which also gave him Africa’s Youth Player of the Year award for 2015.

His displays at that World Cup also earned him a move to Wolfsburg but Osimhen, who turned down Arsenal to play in Germany’s Bundesliga, admitted to struggling as he slowly adapted to both the league and European football.

After a barren season in which the striker, affected by injury, did not score in 16 games, he moved to Belgium where the goals soon flowed – 19 in his first campaign at Charleroi, where he was originally on loan before making the move permanent

In June he was named as Lille’s player of the season in what was his first campaign in France, and the Nigerian was also named in Ligue 1’s team of the season and French sports newspaper L’Equipe, the deal is worth more than $96m (81.3m euro).

Super Eagles’ media officer, Toyin Ibitoye also sent his best wishes to the player as he tweeted: “Congratulations on the move to @sscnapoli@victorosimhen9. Go, conquer Naples like the victor that you are.. shine like the super star that you are and soar like the Super Eagle that you are.. @en_sscnapoli #SoarSuperEagles #Team9jaStrong.”

Osimhen, who will wear jersey number 9 that was this season held by Fernando Llorente, took to social media to celebrate his deal, as he posted: “Can’t wait to put on this iconic jersey, thank you for the warm welcome @sscnapoli #forzanapolisempre.”