Awoniyi Issues Lamentation Over Disallowed Goal In Loss To Hoffenheim 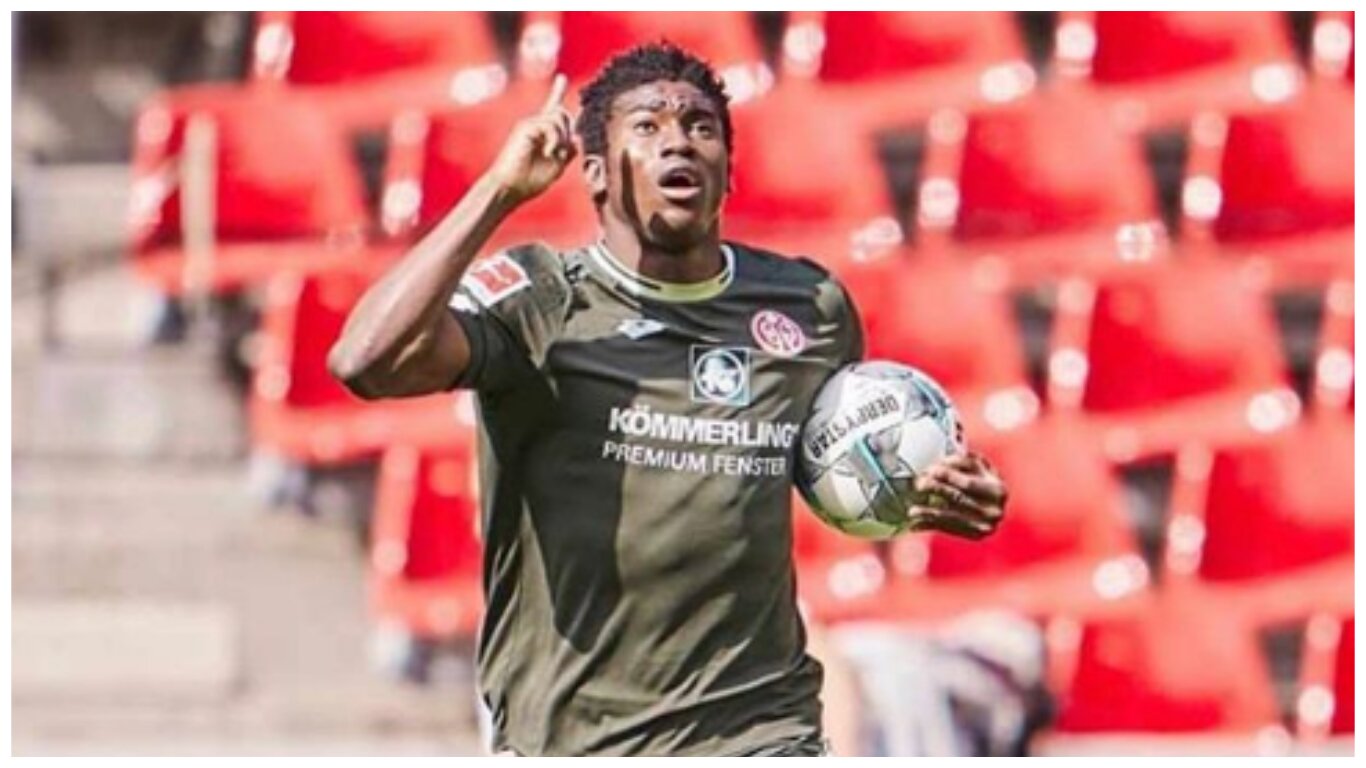 SV Mainz 05 of Germany striker, Taiwo Awoniyi was full of lamentations at the weekend, as what looked a crucial goal for his side off his boots was disallowed, and his side went on to lose 1-0 at home against TSG Hoffenheim, megasportsarena.com gathered.

The UAE 2013 FIFA U-17 World Cup gold medalist, however, admitted that his side were not at their best in the encounter, during which he logged ninety minutes for the first time since his arrival on loan from Liverpool of England last summer.

Just past the hour, Awoniyi thought he had cancelled out Ihlas Bebou’s 43rd minute opener for the visitors, but his goal was disallowed by the referee, as Hoffenheim goalkeeper Baumann had apparently been fouled in the build-up.

While Awoniyi toiled fruitlessly with the hosts, Nigerian-born former Germany under-20 team captain, Kevin Akpoguma was introduced at halftime for his 16th league appearance of this season for Hoffenheim, after missing their last two matches.

O n Sunday, SC Paderborn defender, Jamilu Collins played for 90 minutes, but could not save his side from falling 6-1 at home against Borussia Dortmund at Benteler-Arena, where Jadon Sancho hit home a record-breaking hat-trick for the visitors.

The 20-year-old Sancho became the youngest player to reach 30 goals in the German Bundesliga history when he profited from a counter attack to beat Collins’ goalkeeper, Leopold Zingerle for his third of the evening just before the blast of the final whistle.

Collins got a booking when he caught Achraf Hakimi with a late challenge on the halfway line in the 60th minute, while Thorgan Hazard, Hakimi and Marcel Schmelzer also scored for Dortmund in the wide victory that kept Paderborn bottom of the table and nine points from safety, as their relegation woes hit an almost irretrievable low.

The previous evening in Deutschland, this time at Olympiastadion in Berlin, Jordan Torunarigha was impressive yet again at the heart of the Hertha BSC defence, as they registered a 2-0 win against an Augsburg side containing Noah Bazee and Felix Uduokhai.

Bazee was finally handed his full debut in all competitions, ten months after he joined Augsburg from Hannover 96, where he spent six years, but Javairo Dilrosun showed lovely skill before firing home in the 23rd minute to give his side, before Krzysztof Piatek sealed the win in the third minute of second half stoppage time.

While central defenders Torunarigha and Uduokhai went the distance, Bazee was in action for 81 minutes before he was replaced, but the biggest miss of the weekend had to be Awoniyi, who admitted that his side paid for missed chances in their home defeat by Akpoguma’s Hoffenheim at OPEL Arena on Saturday afternoon.

Mainz have found goals hard to come by in their last three Bundesliga matches, scoring only once in a 1-1 draw with Union Berlin on match day 28 and, though Awoniyi thought he had scored his second Bundesliga goal when he got the ball in the net in the 61st minute, the goal was disallowed by the referee and TSG’s sub, Ihlas Bebou netted what proved to be the game-winning goal two minutes before halftime following a quick counter attack.

Awoniyi, who now has 216 minutes since the Bundesliga resumed, more than he managed in the first 25 games of the season, lamented: “This is a huge disappointment for all of us. We should have decided the outcome of the game in the first half but we didn’t take our chances.”