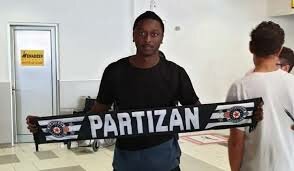 Partizan Belgrade of Serbia striker, Sadiq Umar was the cynosure of all eyes at the weekend, as he caught attention from scouts of Manchester United, Tottenham Hotspur and Juventus, while starring for his club a high-profile local derby, megasportsarena.com reports.

In what could be a fresh fillip for his once-promising career, Umar had the delight of excelling in action from the start, with scouts from United, Spurs and Juve in attendance for the 161st Eternal Derby between his club and Red Star Belgrade on Sunday evening.

A report by Hot Sport Serbia confirmed that scouts from the top three clubs were present at the Partizan Stadion to observe the outstanding talents on both teams, among whom was Umar, who started for the hosts and was in action for 64 minutes before leaving for Seydouba Soumah.

There were also representatives from the German Bundesliga duo of Borussia Dortmund and Werder Bremen as well as Italian Serie A quartet of Juventus, Torino, Atalanta and SS Lazio, with the major talking point turning out to be about Umar, who is enjoying a new lease of life with Partizan after a heated exit from Glasgow Rangers of Scotland in December.

Although Umar could not score in Sunday’s derby, he has a strong scorecard from his last three outings in the Super Liga, as the 22-year-old Rio 2016 Olympic Games bronze medalist with the Nigerian under-23 team has two goals and an assist.