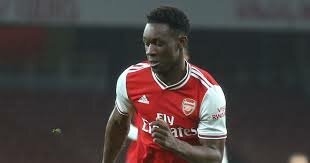 Arsenal of England youth team striker, Folarin Balogun has received an £8m transfer valuation from the London-based English Premier League club, which is coming in quick response to a bid for the youngster by lower division side, Brentford Town, megasportsarena.com reports.

Though Brentford still have a chance of gaining promotion from the English Championship via the play-off final, after earlier losing at home on the very last day of the season and gave the edge to West Bromwich Albion, they are still keen on snatching 19-year-old Balogun from The Gunners.

In response to the scenario, a report by Sky Sports revealed that The Gunners have pointedly informed Brentford that they want a fee of £8m for Balogun, who is yet to play a single first-team game for the London-based side that won the English FA Cup on Saturday by defeating local rivals, Chelsea 2-1 and he will be out of contract next summer.

Brentford, who will meet Fulham in the Championship play-off final on Tuesday, enquired about Balogun in January as they maintain faith in the teenager, who is already knocking on the doors of The Gunners and is regarded as one of the most promising talents in the Arsenal academy.

A report by SportsMole added: “The up-and-coming striker is out of contract at the Emirates at the end of next season, and Balogun is believed to be seeking pastures new after refusing to put pen to paper on a new deal.

“Gunners manager Mikel Arteta announced his desire to keep Balogun on the books in North London, but the forward is supposedly looking for a move elsewhere amid concerns over a lack of game time in the Arsenal first team.

“The Gunners are happy to let Balogun advance his career elsewhere, but it would take a bid of £8m for Arsenal to part ways with the 19-year-old – a fee which is considered to be high.

“Balogun registered 10 goals and four assists in the 2019-20 Premier League 2 and has been strongly linked with a move to Brentford, who will take on Fulham in the Championship playoff final on Tuesday.”

British tabloid, Daily Star added: “Arsenal are demanding £8m for academy starlet Folarin Balogun due to the teenager’s decision to see out his contract until 2021. The Gunners are facing a battle to keep hold of the 19-year-old as promotion-chasing side Brentford have registered an interest in him.

“It has seen Mikel Arteta’s side demand an £8m fee – despite the midfielder not making a single first-team appearance in north London. It is due to a previous contractual conflict that Arsenal can charge that price. The Gunners had tried to get the youngster to sign a new contract in January.”