Olayinka: I Drank Garri With Kuli-Kuli After Training In My Early Days 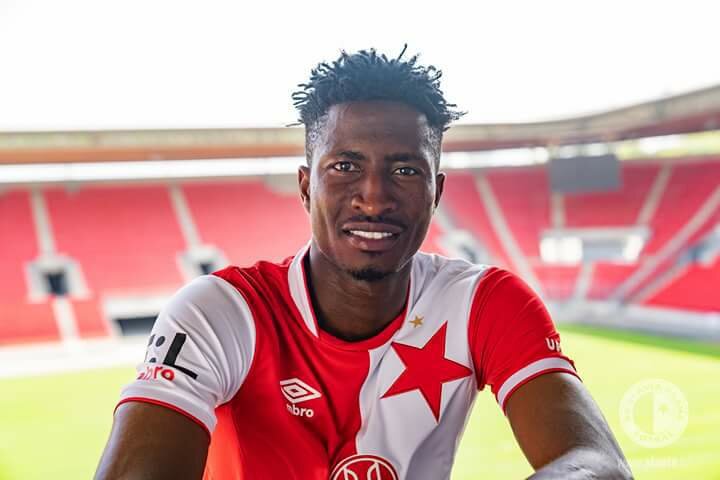 Slavia Prague of Czech Republic striker, Peter Olayinka has joined the growing number of Super Eagles’ rookie reeling out highlights of their early days, as he recounts how he used to drink garri (a local cereal made of dried cassava) with kuli-kuli (groundnut paste mixed with oil and baked into a thick lump) in order to avoid going on an empty stomach after training with his youth club.

Megasportsarena.com gathered that the 23-year-old former KAA Gent of Belgium attacker, who grew up in Ibadan but got his breakthrough to Europe with 36 Lion FC of Lagos, also recalled that his father initially did not support his ambition of becoming a professional footballer.

The youngster, whose middle name is Oladeji, is now heading to his debut with the Eagles, after making hay with a goal against Inter Milan of Italy in the UEFA Champions League, but he admits it would have been a different story had he bowed to pressure from his father, who did not think a career in football was possible for him.

However, the round leather game has now turned out to be the item shooting him up into fame and putting food on the table, as he keeps banging goals for his club in the Czech Republic and is now aiming for a glorious debut with Nigeria on October 13 against Brazil in Singapore.

This past weekend, Olayinka continued to impressive goals’ scoring form with Slavia Prague, as he scored in the 73rd minute of his side’s 2-0 win away to Jablonec, in what was their second goal of the game and took his haul to four in nine league games.

Having also notched one in four UEFA Champions League games, the former Skenderbeu Korce and Bylis of Albania as well as ex-Dukla Prague of Czech Republic dark-skinned dreadlocks-wearing lanky lad is aiming for bigger glory in both the domestic and European fronts, as well as with the Nigerian national team.

Olayinka, who in 2017 was on loan at another Belgian club, Zulte Waregem, began playing soccer as a kid at Army Children FC, under a mentor fondly called ‘Baba Boss’ in Ibadan, from where he was linked to 36 Lion FC and he joined Albanian Superliga side, Bylis Ballsh in January 2012.

He started out with the club’s under-19 squad, as he was still 17-years-old then, but he was soon elevated to the senior side, which was then handled by Agim Canaj, midway through the 2012/13 season, and he was upgrade to full professional football status.

The soft-spoken lad then got his debut in the Albanian Superliga debut on October 20, 2012 versus Luftëtari Gjirokastër, but had earlier allegedly agreed terms with FK Kukësi but on August 28, 2014 he appeared to have sealed another deal with then champions Skënderbeu Korçë.

Olayinka’s transfer to Skënderbeu was intensely questioned by Kukësi and the club’s president, Safet Gjici petitioned Albania Football Association and reported the player to the police, but the lad was eventually cleared to play for the 2014/15 season.

He spent 12 months on loan to Czech Republic side, Dukla Prague after injury robbed him off the opportunity to command a first team action with Gent, which he joined from Skenderbreu in January 2016, then went on to score six goals in 22 games, thereby inspiring his move to Zulte Waregem, but his biggest marks now are with Slavia Prague in Eastern Europe.

While admitting his early days were tough, especially as he had to toil to make ends meeting while cutting his teeth in the backstreets of the Oyo State capital, Olayinka pointed out that he eventually got the nod of his dad to face soccer, and he admits that backing went on to play a crucial role in helping him get a solid foundation for his career.

Olayinka recounted: “I was on the streets for a very long time, things weren’t easy. I suffered mostly growing up; things were difficult.

“I would drink garri and kuli kuli or go on an empty stomach after practice. But I kept my focus and would pray for a breakthrough.

“At first my dad didn’t support me. Later he noticed I could make a living from it and he became my number fan. He bought me playing kits and my boots.

“A lot was going through my mind and playing inside the San Siro was epic. Scoring a goal there made me really proud and it’s a moment I will remember for the rest of my life.”