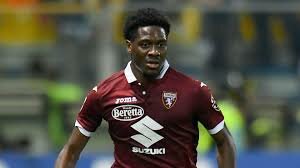 AS Torino of Italy defender, Ola Ayna is facing another threat to his chances of regular playing time with the Italian Serie A club, as reports out of The Land of The Azzurri indicate that his Turin-based side are making moves to get another right-back from Argentina, megasportsarena.com gathered.

Aina has struggled for form in his first full season with The Maroons, who he initially joined in a loan deal from Chelsea of England last season, and he will have to step up his efforts once the season resumes next month, after the forced break caused by coronavirus as a report out of Italy indicates that a new rival is set to join the club this summer.

The report by Turin-based sports daily, Tuttosport revealed that the man to put fresh heat on Aina is River Plate of Argentina international right-back, Gonzalo Montiel, who Torino are said to be monitoring very keenly, with a view to a transfer in the summer.

Should the deal go through, Aina could find himself further down the pecking order in the battle for a starting shirt next season, as the Super Eagles’ dark-skinned 23-year-old versatile lad has not really enjoyed a prominent role before action was put on hold this term, with only 15 starts from a possible 26 in the Italian top-flight.

Aina showed glimpses of his potential last season for club and country, making 22 starts in the Serie A and going the distance in five matches for the Super Eagles at the 2019 Africa Cup of Nations, with a superb assist in their opening match of the competition, which came shortly after Torino paid 9.8 million euros to sign him permanently from Chelsea last summer.

Despite his struggle, recent figures released by Transfermarkt show that Aina is now rated at a worth of eight million euros, making him the most valuable Nigerian defender of the current dispensation.