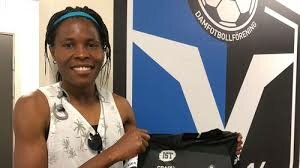 Nigeria’s female national team, Super Falcons’ defender, Ohale Osinachi has served a strong hint about her next port of call, following the confirmation this past weekend about her departure from Club Deportivo Tacón of Spain, megasportsarena.com reports.

Although she spent barely two seasons with the club owned by Real Madrid, the 28-year-old four-time African Women Cup of Nations winner, who has previously played for Rivers Angels of Port Harcourt, Delta Queens of Asaba, Houston Dash of USA as well as Vittsjö GIK and Växjö DFF of Denmark, said she is already on her way out of Tacón.

This is due to the fact that the leggy central defender will officially become a free agent on July 1, as she comes off contract with Las Blancas at the end of this month, after making a total of 17 appearances and scored two goals in all competitions she played for the club, of which 15 of her entire games were in the Spanish Primera División Femenina.

She took to Facebook to disclose her impending exit from Tacón, where she disclosed that she had a lovely time during her short stay and thanked everyone in the team for making things cordial for her, and promised to reveal in due course details of her next port of call.

Osinachi stated: “It is time to announce that I will be leaving CD Tacon when my contract expires at the end of the month and a new chapter is about to begin. I would like to say thanks to everyone at the club and to the fans for all the support and love you have given me this year. It has been amazing. As for my followers, I will let you know my next step in the very near future.”