Moses Simon Cleared From Injury, Set To Battle Metz On Saturday In Ligue 1 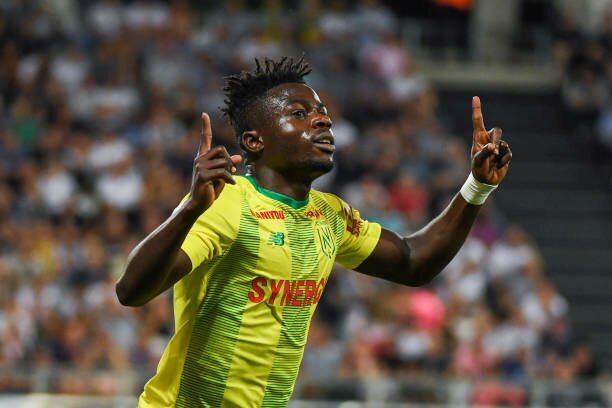 Moses Simon of Nantes celebrates his goal during the Ligue 1 match between Amiens and Nantes on August 24, 2019 in Amiens, France. (Photo by Aude Alcover/Icon Sport via Getty Images)

FC Nantes of France winger, Moses Simon has been cleared to return to action this weekend, as he has been able to shake of injuries worries and make himself fit enough to battle FC Metz in the French Ligue 1 this Saturday, megasportsarena.com gathered.

Simon admitted he is happy with the medical report out of Nantes, which says he will be ready for selection in Saturday’s home game against Metz, despite being forced out of his team’s 3-3 draw last weekend away to Dijon.

The skilful winger, who is on loan from Levante of Spain, was forced out in the first half of that encounter, after he suffered a knock to his knee in a collision with the opposing goalkeeper, as he notched home a goal, but the former SK Trencin of Slovakia and KAA Gent of Belgium star got back to personal training on Wednesday.

After training on his own in midweek, Simon got the nod by Nantes’ medics for him to join the rest of the squad on Thursday, after scans showed he had copped only a minor complaint and he is now set to tango Metz this weekend, much to the delight of the Kaduna-born lad, who has got nine goals and five assists in all competitions this season.

Despite playing for only 43 minutes of last weekend’s game at Stade Gaston Gerard, Simon was named man of the match, which he admitted was a further boost to his recovery process and he has now set his mind on doing even better in the coming game versus Metz.

Simon submitted: “I’m really happy I’m fine now and the initial fears about my injury have been dispelled. I trained alone on Wednesday and I felt better and I will join my colleagues in training ahead of this weekend’s clash.”