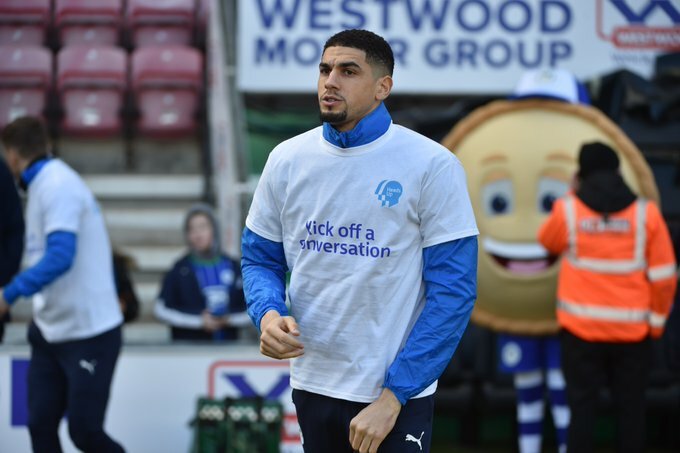 Wigan Athletic of England’s new loan signing from Brighton & Hove Albion, Leon Aderemi Balogun has expressed satisfaction with his debut in the English Championship with The Latics, as he believes it is better to start playing again, even if it is in the lower division.

Megasportsarena.com reports that, after failing to make his mark at Brighton, where he was restricted to merely training with the main team, but left out of several match day squads, the Germany-born stopper is now heaving a sigh of relief.

The mulatto lad, who played for Fortuna Dusseldorf, Werder Bremen, Darmstadt and SV Mainz of Germany before moving to Brighton in 2018, is now eager to start a new chapter in his career with Wigan, who once had former Super Eagles’ star, Julius Efosa Aghahowa and Victor Moses on their cards.

It is now forward march for Balogun, after getting his Wigan debut in a 2-2 draw at home with Middlesbrough in a Championship clash on Tuesday night at DW Stadium, where his club’s gaffer, Paul Cook was forced to make the first change of the game by sending on the Nigerian centre back in the 64th minute.

Cook had to tinker with his formation after Chey Dunkley received a second yellow card and was dismissed in the 62nd minute and, four minutes after Balogun entered donning jersey number 37, Boro took the lead through Lewis Wing.

However, it was relief all the way for Balogun, as the home team got a share of spoils courtesy an own goal from Moukoudi with 14 minutes left on the clock, thereby marking a happy start for the deadline day signing from The Seagulls, who had spent all 90 minutes of the previous game against Preston North End last weekend and was not eligible to face Leeds United a day after.

Balogun, who managed only two appearances for Brighton in the first part of this season, before heading to Wigan on loan for the remainder of the campaign, was ecstatic after the match, ahead of which Wigan stated on social media via their verified handle @LaticsOfficial: “Leon will wear number 37 whilst on loan from @OfficialBHAFC. @LeonBalogun in the 18 for the first time today.”