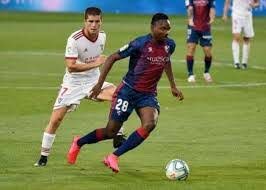 Huesca of Spain midfielder, Kelechi Nwakali has declared that he has a burning ambition to help the club gain promotion to the top-flight LaLiga this season, and he believes his target would be achieved when the campaign eventually comes to an close, megasportsarena.com reports.

After facing an initial torrid time at the start of his career with Huesca following his release by FC Porto of Portugal, after sealing a transfer from Arsenal of England, Nwakali is now looking good to finally put his career on track and he wants to get team glory at the same time.

He never got to play a single game while his contract ran with Arsenal, who earlier loaned him to MVV Maastricht and VV Venlo of Holland before the move to Porto surfaced, but those days appear in the distant past and forgotten as the Chile 2015 FIFA U-17 World Cup-winning captain finally played for Huesca earlier this week.

Nwakali was impressive in helping a revival mission for the promotion chasers when he got off their bench to help them salvage a point away to Albacete Balompie on Monday and, having pulled off the first step of his ambitions at Huesca, Nwakali has now vowed to do all he can to help the LaLiga 2 side return to the elite division.

Though they failed to win their last two games, the former Golden Eaglets, Flying Eagles and Olympic Eagles’ skipper, who has now twice played as a substitute in Huesca’s last two matches, assured that he will continue to work hard in training and hopes he gets his first start soon, as the 22-year-old aims to consolidate on the gains he got from the visit to Albacete.

His next task is to help Huesca close in on second place Real Zaragoza for the second-tier league’s automatic promotion slot; which looked almost impossible in the last match, when Daniel Ojeda put the hosts ahead on the 21st minute.

They held the lead going into half time, after which Nwakali replaced Cheick Doukoure on the hour mark and although the hosts who struck again when Ojeda completed his brace to make it 2-0, the Nigerian youngster helped the visitors dig deep to pull one back nine minutes from time and then rescued a point in the dot of 90 minutes.

The product of Diamond Football Academy of Umuahia product eventually got a rating of 6.1 over ten, after he completed 87% of his passes, made one key pass and contributed defensively in the closing stages of the game, during which he also displayed excellent abilities on the ball.

His overall rating across both matches he has played since the restart of action in Spain has seen Nwakali complete 90% of his passes per game, with his composure in his half a standout, as he is yet to concede the ball to any opponent, making it a 100% accuracy for him in that area of the field, while helping his team up to fourth position on the log of LaLiga 2.

He is now aiming to consolidate and do even better when Huesca entertain table-toppers, Cadiz on Wednesday, with his team hoping to close the gap, as the season enters its final stretch, with just eight matches left for each club, and Nwakali says he and his colleagues remain focused on gaining promotion, even as he promised to personally work harder in their remaining games.

Nwakali told AOIFootball.com: “I’m excited to be playing competitive football again. I have waited so long for this moment and I’m fully committed to helping the club achieve promotion.

“The aim is to pick one of the automatic promotion tickets; we have a big game tomorrow against the league leaders Cadiz. It won’t be an easy match but the entire squad are very committed to ensuring we get back to winning ways.”