Eniola Aluko Alleges Facing Racism During Her Tenure With Juventus 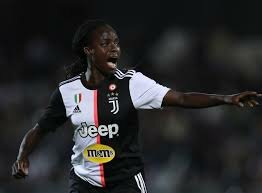 Nigerian-born former England female international, Eniola Aluko has alleged that she faced a torrid time of racism hauled against her during her time with Juventus of Italy women’s team, megasportsarena.com gathered.

The dark-hued lass, who faced similar controversies and discrimination in the latter days of her career with England’s national team, disclosed that it was tough for her to concentrate on giving the best during games, due to what she called the horror she faced on account of her skin.

This is in contrast with the glee she expressed when she signed for Juve in June 2018 and won the Serie A, Coppa Italia and Super Coppa Italia before leaving the Turin-based club last month, as the 32-year-old star has recalled scenarios off the pitch where she was on the receiving end of racist comments, despite merging as the club’s top scorer and helping them win three trophies.

However, in spite of her successful time on the pitch while with The Old Lady, Aluko has now opened up on racism off the pitch, which she alleged was akin to the smear she faced from ex-England women’s coach, Mark Sampson, and ultimately ruined her national team career.

The Nigeria-born forward, who got her debut as a pundit on Amazon Prime’s coverage of English Premier League football last week, left Chelsea a year ago to explore pastures new abroad, from which she still cherishes winning Coppa Italia after beating Fiorentina in April’s final, even as she now contemplates retirement back home in England.

Aluko told The Daily Telegraph newspaper: “Every time I landed at Turin airport, I was being treated like Pablo Escobar. Sniffer dogs were being set upon me. The minute I say I play for Juventus, the whole atmosphere changes.

“If I didn’t play for Juventus, I found myself having conversations in broken Italian: “You cannot make me feel as if I’m about to rob the store just because of fear and your ignorance.” I feel like I can continue playing but the mind and body are different things. You can feel very tired mentally but good physically. Am I passionate about it still, regardless of how I feel physically?”