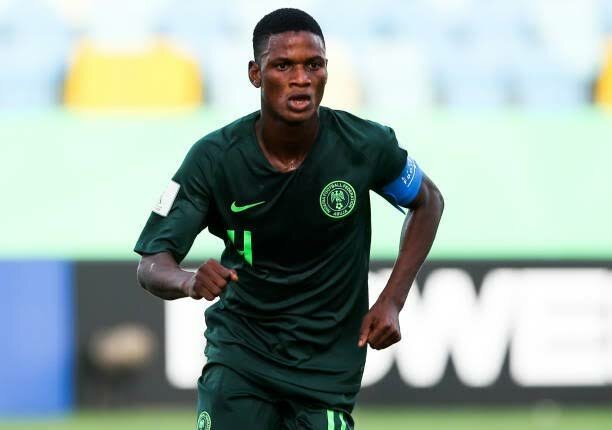 Golden Eaglets’ captain at this year’s FIFA U-17 World Cup, Samson Tijani is attracting transfer interest from three top European clubs, with Ajax Amsterdam of Holland, Real Madrid of Spain and RSC Anderlecht of Belgium said to be in the hunt for his signaturemegasportsarena.com has learnt.

Although Tijani could not lead a largely faulty Eaglets’ squad past Holland in the round of 16 at Brazil 2019, his two goals and man of the match achievement in their opening 4-2 win against Hungary appears to have shot his status high in the sight of the three club’s scouts.

However, Anderlecht appear keener on a deal for the youngster, whose father, according to a report by allnigeriasoccer.com, has opened talks with eight agents and club scouts for the Collins Edwin of Lagos midfielder and, due to multiple bids, the Belgian outfit have decided to visit the player’s home in Nigeria to sign the Eaglets’ skipper, who clocks 18 on May 17, 2020.

The report adds: “Now the hurdle to cross is how would Anderlecht resolve the interest of the different agents and the two clubs (Collins Edwin SC and Jossy United Football Club, Owerri) that are contending for the player’s economic rights.

“An unnamed Italian club are in a rat race with the 34-time Belgian champions, who are billed to arrive Nigeria in the coming days to sign Tijani. An Anderlecht talent spotter ran the rule over the midfielder during the Golden Eaglets’ 3-2 win over Ecuador on October 29.

“A Man of the Match award winner at the FIFA U17 World Cup, Tijani was watched by Real Madrid and Ajax Amsterdam before the Golden Eaglets exited the tournament while Manchester City have also been credited with an interest.”