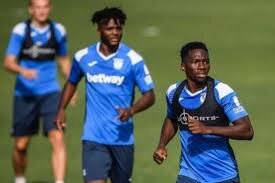 Nigeria’s legion of players in the Spanish top-flight league, Samuel Chukwueze, Kenneth Omeruo, Chidozie Awaziem and Oghenekaro Etebo have received good news for themselves and their clubs, as action is set to resume in the Iberian nation early next month, megasportsarena.com gathered.

Although Etebo s yet to get confirmation of an extension of his current loan deal from Stoke City of England to Getafe, which had initially been fixed to end this month, he will join his Nigerian colleagues in celebrating good news from Spanish authorities, who confirmed that LaLiga will resume on June 8.

That will pave way for the duo of Omeruo and Awaziem at CD Leganes and Chukwueze at Villarreal to shake off the tedium, boredom and discomfort they have faced in almost three months of restrictions caused by coronavirus outbreak n the Land of The Armada, as they now mar the seconds rolling by towards the restart of excitement in one of Europe’s top-five leagues.

Omeruo, Awazem, Etebo and Chukwueze’s fans will also be bracing to start watching and following their favourite players once again, after LaLiga got the nod to restart, though with strict guidelines from Spain’s Ministry of Health, which had been put on red alert once many of the clubs began returning to training earlier this month.

It is now bound to be further expansion for the clubs, who are currently training in small groups of up to 10 players each, having initially returned to individual training in early May, as La Liga president, Javier Tebas reiterated his desire to stage matches every day once play resumes.

Tebas said: “That’s what I hope. We shouldn’t have any problems playing on Mondays across the 11 rounds of matches we have left to play. I hope for some sense from the Spanish Football Federation on this.

“It’s very important for us to be able to give both our national and international broadcasters, and fans across the world, football on as many days as possible to ensure as little disruption as possible.”