Billing Confesses: I Look Forward To Playing For Denmark Not Nigeria 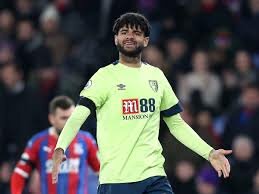 Bournemouth of England midfielder, Philip Chinedu Billing has confessed that he never had any thought about playing for Nigeria, as his aspirations all along have been on his mother’s country, Denmark, megasportsarena.com reports.

Although many observers would have thought Bulling would opt to follow his father’s lineage and commit his international future to the Super Eagles, the former Huddersfield Town of England youngster pointed out that he does not know anything about Nigeria and all his early days were spent n Denmark.

Consequently, the 23-year-old lad reckons it would have been awkward for him to play for the three-time Africans, hence his decision to politely tell Eagles’ coach, Gernot Rohr that he was not available for an invitation by Nigeria, as he had already turned his mind on starring at full senor level with the Danish national team.

The midfielder is now a key player at Bournemouth, where he has made 29 appearances across all competitions in this campaign, which comes after he played 81 games for Huddersfield, with who he broke into their first team in 2014 and scored five goals before leaving to link up forces with The Cherries last summer.

Although he had been courted by Nigeria Football Federation (NFF) since 2018, Billing insists he never had any thought about playing for his father’s country and remains happy that he used every opportunity he had to play for Denmark at youth level, even as he now looks good for a full-fledged senor career with The Red & White.

While admitting he turned Rohr down when the Franco-German tactician approached him about the possibility of pledging his allegiance to Nigeria, Billing said he has nothing to worry about in publicly stating where his heart lies, though he is yet to play for Denmark’s national team.

Billing told BT Sports: “It would be strange to stand up for Nigeria when I feel 100 percent Danish. Of course, I have Nigerian roots and am half Nigerian, but I was raised and born in Denmark.

“I have a Danish mother, Danish little brother and Danish little sister and a Nigerian father. But this is Denmark I want to stand for. That’s my big dream. I’ve talked to (Nigeria’s) coach, but I know where I want to play. I want to play for Denmark, so it is no longer than that.

“He just said he really wanted me to play for Nigeria because the upcoming World Cup and Africa Cup of Nations will be played soon. I made it pretty clear to him that I wanted to play for Denmark. That’s my big dream.

“It’s something I look forward to very much. Playing with the national team and hopefully in the future a few minutes and make my debut. I have nothing but positive things to say. That’s my feeling. I can say that I am 100 percent in Denmark.”