Saka Set To Rise Beyond £3,000 Per Week Pay Package At Arsenal 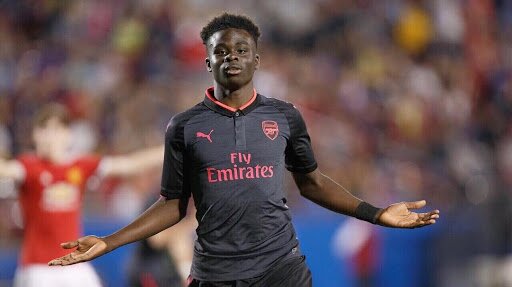 Arsenal of England youngster, Bukayo Saka is set to rise beyond his current pay package of £3,000-per-week, as officials at Emirates Stadium, London are considering giving him a new contract with improved terms attached, megasportsarena.com gathered.

The proposal is coming in recognition of Saka’s new status as a regular in The Gunners’ main team, plus the fact that he has held do9wn adequately in a make-shift left-back position, due to the absence of two key defenders out with injury.

Despite an out-and-out winger from his early days at Arsenal, Saka has been forced to play in defence since late last year and, after continuing in same role for the start of 2020, The Gunners’ top brass have deemed in fit to give him due reward.

Saka first broke into Arsenal’s first team last season under former coach, Unai Emery, during which time he got four senior appearances, and he has made 23 appearances in all competitions in the combined schedules of the erstwhile handler as well as interim gaffer, Freddie Ljungberg and the current boss, Mikel Arteta.

However, an additional report by Daily Mail indicates that another factor that has led to the move by Arsenal to improve Saka’s wages is in order to ward off interest in him from some top clubs, as two of their English Premier League rivals, Manchester United and Liverpool as well as Bayern Munich of Germany are said to be tracking the youngster.

Consequently, plans are in place at Emirates Stadium to increase Saka’s current deal from £3,000 per week, with a new, improved package set to reflect to a certain extent his value as a versatile player, as the Nigerian-born dark-skinned lad has proven that he can play as a winger on either side of the pitch or as a left-back in defence.

With that in view, talks have begun in north London about a contract extension for Saka in the final phase of the ongoing season, especially as he is entering the final 18 months of his current deal and would expectedly attract frenetic attention in the summer transfer window.