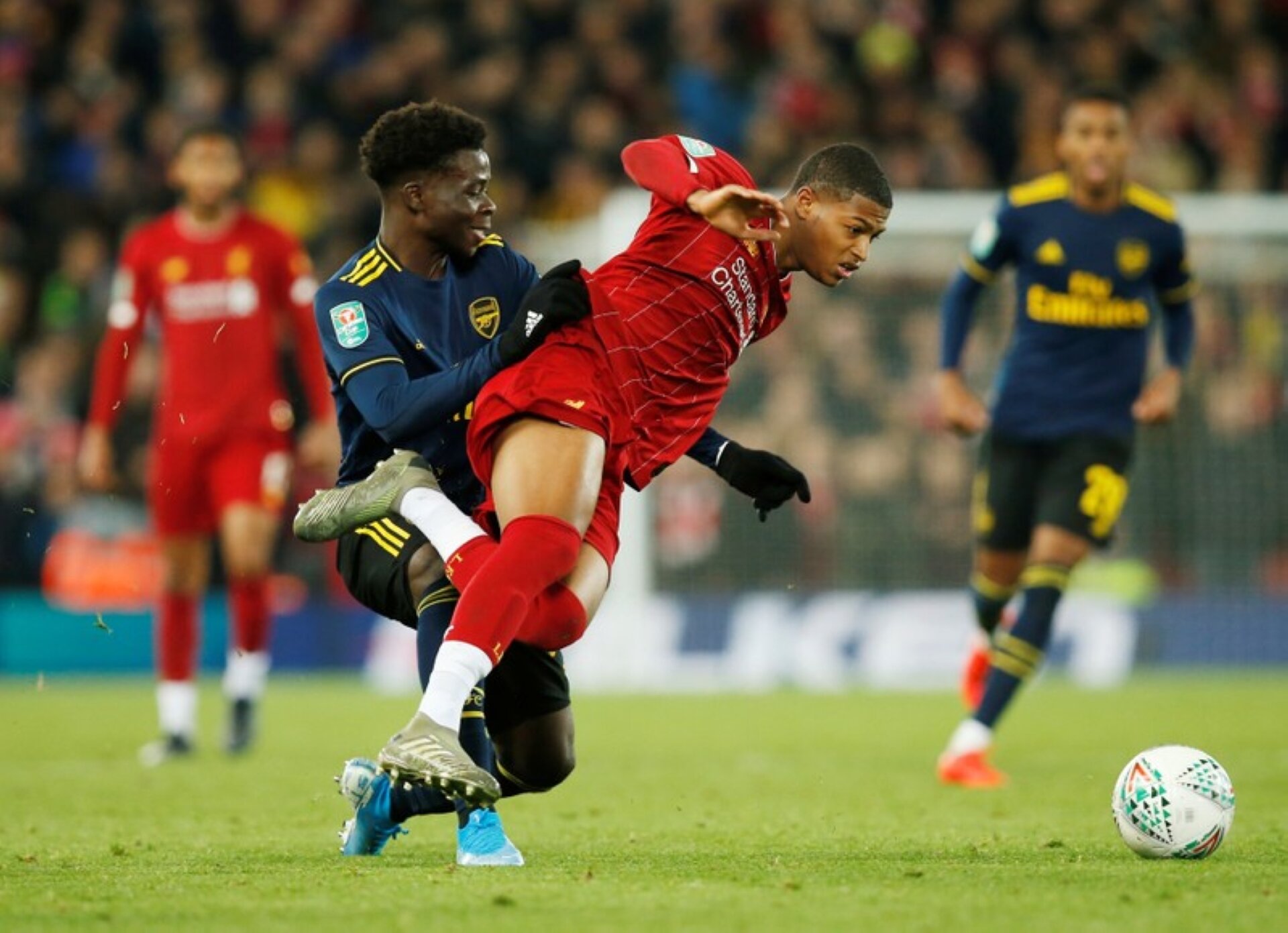 Arsenal of England youngster, Bukayo Saka on Wednesday emerged with his marks on pundits’ cards, following his efforts and assist in The Gunners’ loss to Liverpool in the Carabao Cup, megasportsarena.com reports.

Saka played all 90 minutes of the encounter at Anfield, as Arsenal lost grip of a 2-0 lead for the second time in three days, and eventually lost on penalties, following a thrilling 5-5 climax to the encounter on Merseyside, where Curtis Jones’ spot-kick eventually sealed Liverpool’s place in the quarter-finals.

Divock Origi sent the game to spot-kicks with a 94th-minute equaliser as Arsenal again surrendered a two-goal lead and Liverpool demonstrated their powers of recovery in a contest that will live long in the memory.

James Milner reduced the deficit from the spot before the interval (43), but it was his slack pass that allowed Ainsley Maitland-Niles to re-establish Arsenal’s two-goal lead (54) from close range.

Liverpool then scored twice in four minutes to stage a brilliant comeback as Alex Oxlade-Chamberlain’s thunderous finish (58) was added to by Origi’s rifled strike from the edge of the box (62).

Arsenal thought they had booked their place in the quarter-finals when Joe Willock found the top corner with a strike worthy of deciding any contest – but Origi sent the game to penalties in stoppage time with a trademark finish from Neco Williams’ cross.
Both sides scored their opening three penalties in the shootout before Arsenal substitute Dani Ceballos saw his effort kept out by Caoimhin Kelleher, and after Origi had once more held his nerve to preserve the advantage, Jones showed immense composure to send his side into the last eight.

Post-match ratings, though, favoured the Nigerian-born winger to a large extent, with his total average points eventually collated at 6/10, which was the exact figure granted him by two highly popular websites.

First out, ESPN wrote: “MF. Bukayo Saka, 6 — Provided a nice assist for Martinelli’s second of the evening and always looked lively in and around the box.”

The second verdict in his favour came from the4thofficial.com, which stated: “LM. Bukayo Saka – 6/10. The Gunners youngster made some penetrative dribbles which caused a few headaches for the Reds defenders. He got an assist to show for his efforts.”

However, the verdict by Sky Sports was slightly different, with a point higher going his way at 7/10, stating: “Saka was another bright spark in the Arsenal side during their spirited first-half comeback, combining well with Ozil to set up Martinelli’s second. Provided Neco Williams with plenty of problems in those opening 45 minutes, but another who faded.”